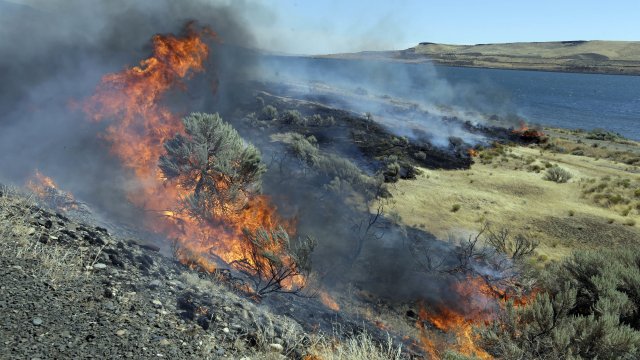 U.S. officials have released plans for removing or changing vegetation in western parts of the country to reduce wildfires.

The ecosystems are threatened by an invasive species, cheatgrass. It spreads rapidly after fires and kills off native plants that are critical habitat for the sage grouse. The threatened bird helps maintain the environment for mule deer, elk and other wildlife.

While the federal plan doesn't authorize any specific projects, its analysis supports treatments like prescribed fires, fuel breaks and other tactics to limit or prevent fires.

The U.S. Bureau of Land Management originated the plan during the Obama administration as officials tried to avoid listing sage grouse as protected under the Endangered Species Act, which could have limited cattle ranching, mining and recreation.

It's similar to a plan the bureau released last summer that would build 11,000 miles of fuel breaks, or strips or blocks of vegetation that have been altered to slow or control a fire.

But not all environmentalists are fans of the plans. The executive director of the environmental watchdog organization, Western Watersheds Project, said, "The BLM is clearly trying to write itself a blank check to do large and damaging vegetation removal without any further input or detailed analysis. This is an agency whose track record of vegetation manipulation has overwhelmingly resulted in habitat destruction.”

The move Friday came as thousands of California residents had power shut off due to wildfire threats in the worst fire season on record. And it's expected to continue in California and Oregon as the west's driest period coincides with its windiest.