Officials Say Over 1,000 People Unaccounted For In California Fires 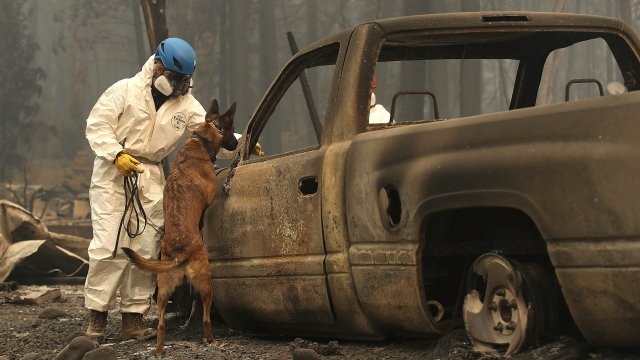 President Donald Trump will visit California on Saturday to meet with individuals affected by the wildfires there.

As of Saturday morning, over 70 people have died in the Camp Fire and more than 1,000 people are unaccounted for. Authorities say that number could change as they follow up with families and confirm relatives whereabouts.

The fire is reportedly the worst in California history. It has destroyed over 12,000 structures — including much of the town of Paradise, California. According to fire officials the Camp Fire is only about 55 percent contained.

Another large fire is burning in Southern California as well. The Woolsey fire has consumed almost 100,000 acres of land since it began a little over a week ago. At least three people have died in the fire.

The Trump administration has issued Major Disaster and Emergency Declarations and Fire Management Assistance Grants to help pay to fight the fires and aid in recovery efforts.

Last week, the president said the fires were caused by poor forest management and suggested he might cut off federal money to fight the fires if the issue wasn't remedied.