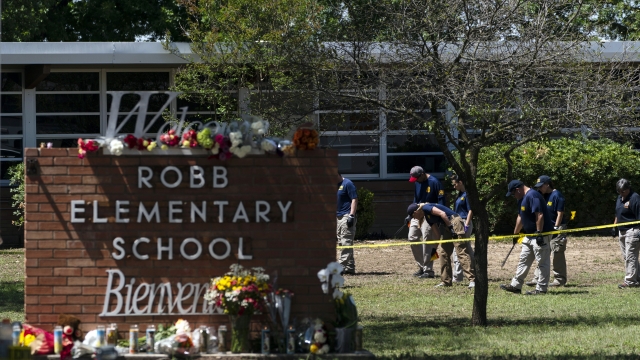 SMS
Officials Delay The Firing Of Uvalde School Police Chief
By Isbella Diaz
By Isbella Diaz
August 4, 2022
The firing of Pete Arredondo, the Uvalde school police chief, was postponed for a second time due to a scheduling conflict.

A termination hearing was postponed for the school district police chief blamed for not taking control during the massacre at Robb Elementary.

It's yet another delay in a tragedy marked by officials acting too late.

The delay, called a "scheduling conflict," is the second time the hearing has been postponed since the Uvalde school superintendent recommended firing Pete Arredondo weeks ago.

"Do you think our officers that were in the school room that day did their job? Yes or no?" said Michael Brown, the father of a student who survived the shooting. "If they didn't do their job, why are we still employing them?"

Arredondo has been widely criticized for his inaction during the massacre that left 19 students and two teachers dead.

He has stayed mostly silent publicly but told the Texas Tribune "not a single responding officer ever hesitated, even for a moment, to put themselves at risk to save the children," and "we responded to the information that we had and had to adjust to whatever we faced."

That account was disputed by video later released showing that Arredondo was among the first on scene and waited more than 70 minutes in the hallway outside the classrooms where the gunman had opened fire. Some shots were still continuing as officers waited outside.

Steve McCraw is the director of the Texas Department of Public Safety.

"There's compelling evidence that the law enforcement response to the attack at Robb Elementary was an abject failure,"McCraw said. "The only thing stopping the hallway of dedicated officers from entering room 111 and 112 was the on scene commander who decided to place the lives of officers before the lives of children."

Still, a 77-page report released by a Texas House committee last month found a majority of those who responded were federal and state officers, while there were only five school officers on the scene.

Arredondo will remain on unpaid leave until the Uvalde school district can decide on a new date for the termination hearing.