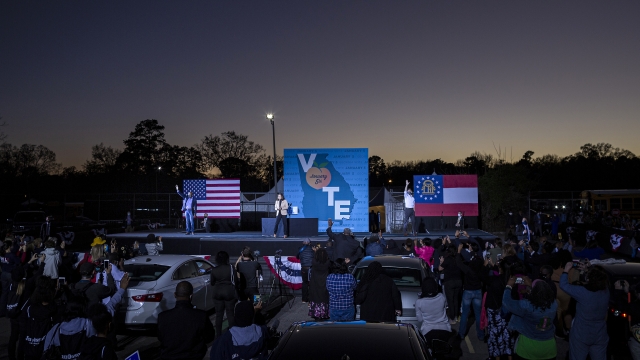 The Georgia runoff elections on Jan. 5 will determine which party will hold the majority in the U.S. Senate.

Both President Trump and President-elect Joe Biden will be in Georgia today, hoping to make one last impression ahead of the runoff elections tomorrow.

President Trump will be at a rally with Republican Sens. Kelly Loeffler and David Perdue.

Vice President Pence will make an appearance at a church about an hour south of Atlanta.

Biden and Vice President-elect Kamala Harris will be in Atlanta with the two Democratic candidates – Jon Ossoff and Raphael Warnock.

Ossoff said, "That is a direct attack on our democracy. If David Perdue and Kelly Loeffler had one piece of steel in their spines, one shred of integrity, they would be out here defending Georgia voters from that kind of assault."

Sen. Loeffler threw her support behind the president.

"My number one objective right now has to be winning on January 5 so we can get to the bottom of what happened in these elections. We know that Democrats will never get to the bottom of it. That's what we're fighting here for. I am continuing to fight for this president. He's fought for us and so we're gonna stay on top of that," Loeffler said.

Almost 3 million votes were casted in the early period of voting. That ended on New Year's Eve.

Of course all eyes are on Georgia because the Senate runoffs will determine the balance of power in the Senate.