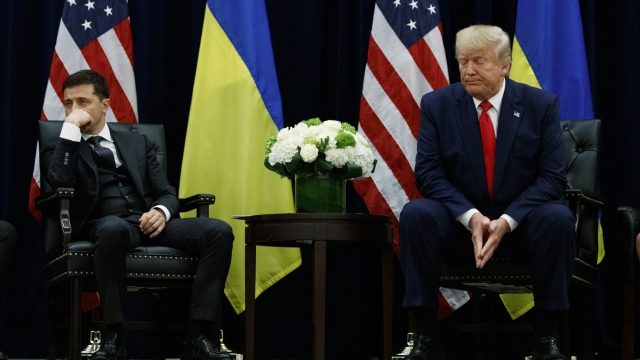 Trump repeatedly pushed for Zelenskyy to investigate now President Joe Biden, and his son Hunter, in exchange for military aid.

"There's a lot of talk about Biden's son, that Biden stopped the prosecution, and a lot of people want to find out about that, so whatever you can do with the Attorney General would be great. Biden went around bragging that he stopped the prosecution so if you can look into it… It sounds horrible to me," Trump said to Zelenskyy during the phone call, according to released transcripts by the White House.

This conversation, where Trump's exact words were "I would like you to do us a favor, though," triggered the House inquiry that led to his first impeachment.

"By that time, we're reading between the lines and reading what, really, President Trump was after quite well, so obviously, there was some surprise President Trump was so explicit in his messaging, but you know, we knew what to expect and we kind of, we had a strategy in place," Igor Novikov, one of President Zelenskyy's former top advisers — who was in the room when the call happened — told Newsy.

Novikov said that they chose the "strategy of playing dumb" and "stalling" as much as they could, because Zelenskyy had warned them that their top priority was "to do whatever we can to not get involved in U.S. domestics."

"Mr. Giuliani had introduced some new faces in Ukraine representing him, and some of those people were directly involved, and we knew they were involved, with Russia. Some since have been designated as Russian agents and sanctioned both by the U.S. and Ukraine," said Novikov.

Novikov said that they hoped that by humoring Trump and "playing dumb," they would be in the clear, but later realized that after what Trump called the "perfect" phone call, they had their work cut out for them.