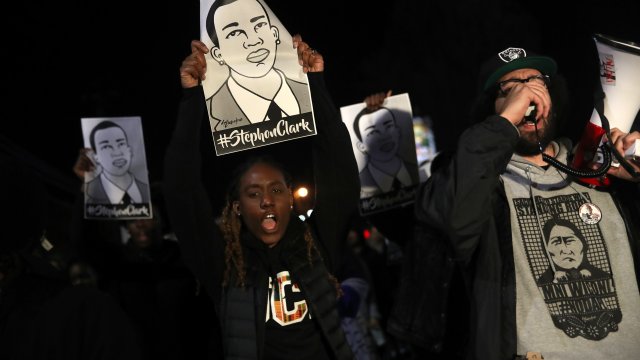 SMS
Calif. AG Announces No Charges Against Officers Who Shot Stephon Clark
By Jamal Andress
By Jamal Andress
March 5, 2019
This comes just a couple days after the Sacramento County district attorney announced she would not be filing charges against those officers.
SHOW TRANSCRIPT

"No criminal charges against the officers involved in this shooting can be sustained."

California Attorney General Xavier Becerra announced Tuesday that he will not be filing charges against the two Sacramento police officers who shot and killed Stephon Clark in March 2018. Becerra and the state's Department of Justice conducted their own independent investigations of the shooting.

"Was a crime committed? There's no question that a human being died. But when we look at the facts and the law and we follow our ethical responsibilities, the answer to that question is no," Sacramento County District Attorney Anne Marie Schubert said.

This comes just a couple days after the Sacramento County district attorney also announced she would not file charges against those officers.

Since the district attorney's announcement Saturday, there are have been protests throughout the Sacramento area. On Monday night, police arrested more than 80 people, including a local reporter, during a protest on the east side of the city.

Stephon Clark was shot and killed in his backyard by two Sacramento police officers who were investigating a vandalism complaint. The officers say they believed Clark was pointing a gun at them, and they fired 20 times in his direction. He was ultimately found to be unarmed and just holding a cellphone.

While the criminal investigation into Clark's shooting is now over, his family still has a pending wrongful death lawsuit against the city of Sacramento and the two officers who were involved.