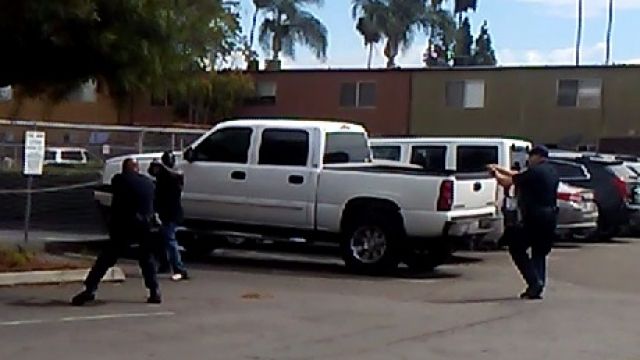 Protests were set to continue Wednesday after police fatally shot a black man near San Diego on Tuesday.

As of Wednesday morning, the El Cajon Police Department had not released the victim's name. The department says the man was behaving erratically. He reportedly had one hand concealed in his pocket and didn't immediately comply when officers told him to remove it.

One officer deployed his stun gun and another fired his weapon after police say the subject removed an object from his pocket, pointed it at the officers and stood in what the department called "a shooting stance."

Police released a still image of that moment from a video a witness captured at the scene.

The man later died from his injuries at a local hospital.

The San Diego Union-Tribune reports friends and a relative of the man said he had mental health issues, though that information was not included in the police statement. Other outlets cite sources who described him as "mentally challenged."

The Washington Post reports mental illness has been a factor in about 25 percent of all fatal police shootings so far this year.

According to the police statement, the two officers involved will be placed on administrative leave.