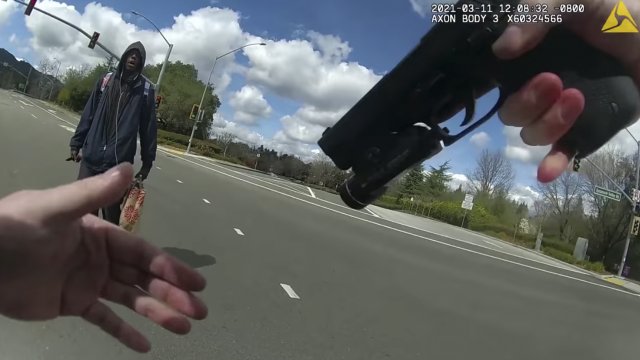 While prosecutors carried out a two-year investigation, officer Andrew Hall killed a second suspect on the job.

Footage of a March 11 police shooting in Danville, California, starts with an officer asking a man to stop walking away from him.

Wilson pulls out a knife. Officer Hall tells Wilson to drop the knife three times in quick succession. Wilson refuses. Hall shoots him in the head.

The officer is now facing felony manslaughter and assault charges — but not in connection with this shooting.

Turns out the same day the local sheriff's office released this video, Hall was charged with killing a different man years earlier.

The county DA says Hall used "unreasonable and unnecessary force" when he shot Laudemer Arboleda nine times during a slow-speed pursuit in 2018.

Now, some are questioning why it took over two years for Hall to be charged in Arboleda's death — and, if charges had come sooner, whether he even would have been on the force in March, when he killed Wilson.

Local attorney John Burris, who is representing Tyrell Wilson's family, called Hall a "murderer hiding behind a badge" and blamed local officials for letting Hall back on patrol after "being on clear notice of the threat he posed."

The local sheriff has defended Hall in both cases, calling the shootings justified. In reaction to Wilson's shooting, the sheriff said: "He did pull a knife on Officer Hall. He did threaten Officer Hall. And he did start advancing toward Hall."

The shooting of Tyrell Wilson is under investigation by the Contra Costa County Sheriff and district attorney.