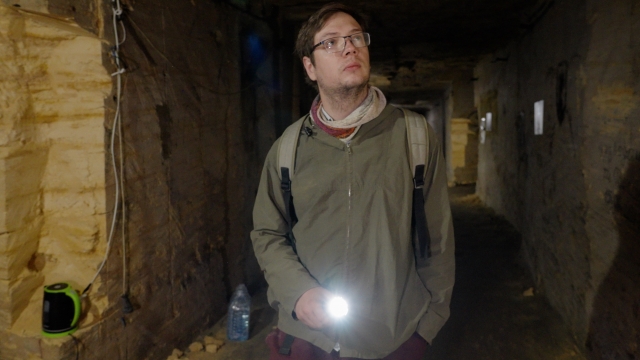 Five stories below the streets of Odesa, there's a labyrinth of tunnels. 1,500 miles of them have provided, in the best of times, a challenge for urban explorers like Roman Mauser.

In the worst of times, it's been a sanctuary for the unthinkable.

"In Soviet times, it was decided to make bomb shelter inside the catacombs because they lay very deep underground," said Mauser.

The foe then was the United States and the fear of nuclear bombs dropping on Odesa.

"It was designed to protect from nuclear blast wave to doors," said Mauser.

The Cold War thawed, the Soviet Union dissolved, Ukraine gained its independence and the catacombs' relevance slid into that of a rusty, dusty curiosity.

But then Russian President Vladimir Putin trained his missiles on the prized seaport city above it. Since February, strikes have killed more than 30 people.

And with front-line fighting just 90 miles away, the city remains under constant threat.

ROMAN MAUSER: The idea to use this place as a bomb shelter came almost immediately when the first shock from the first cruise missiles came. We understood that it will be a long-term war.

NEWSY'S JASON BELLINI: What did you have to do to prepare it for people to be down here?

MAUSER: First of all, build places people can rest.

MAUSER: It's comfortable enough. If you hide from cruise missiles.

Mauser and his friends hauled down wood and plastic crates to build beds, benches and a dining table.

MAUSER: For me when the war started. I donated almost all my resources I could.

An electrical engineer by profession, Mauser established a way to maintain contact with the world above. And he strung electrical wires down into the dark depths.

MAUSER: The waves go through this cable and you will have internet. I brought more than 200 meters of my own cable here.

BELLINI: You brought electricity down here where it wasn't before?

MAUSER: Nothing. It was completely abandoned. We cleaned this place.

BELLINI: All this stuff down here. The water, these plastic bags. Who do those belong to?

MAUSER: This supplies were brought by people who live nearby, and everybody has his own place here.

Back in May, on Russia's victory day, more than 100 people sought shelter in the catacombs.

MAUSER: People with children, dogs, cats, old people, everybody. Because people are really afraid that Putin will launch lots of cruise missiles.

In finding safety beneath their city, they became part of a long line of the underground's hiders and seekers.

Miners of the 19th century excavated the limestone with which Odesans built their city by the sea into a world-renowned metropolis.

Eventually, 20th century high-rises caused the collapse of some sections of the catacombs. Other parts can only be accessed with specialized equipment.

BELLINI: Past this point it gets a lot narrower and there's a lot less headspace. And I'm told if you keep walking for about an hour through these tunnels, you'll eventually come to an area where it's flooded, and a natural lake under the city exists.

MAUSER: It's very difficult to live in catacombs, very difficult for one week, maybe for one month is some sort of hell — for one year it's like a post-apocalypse game.

Despite the dangers of war, Mauser continues his YouTube channel documenting his Odesian underground odysseys.

MAUSER: We do not know what will happen in this war. We do not know what Putin will do. We also, we are really afraid of nuclear attack. If he will get a lack of conventional weapons, the only power he will still have is his nuclear weapons. And this place can save you for a long time. The underground world will save lives if there will be a need for it.