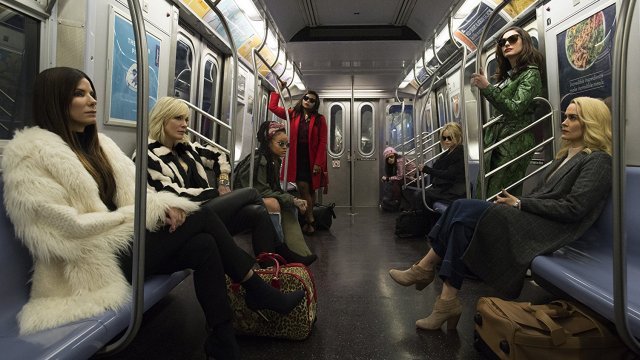 As far as all-star casts go, it doesn't get much better than Bullock, Blanchett, Kaling and Hathaway. But if I'm being honest, you had me at "Rihanna's in it."

Taking the No. 1 spot this week in convincing fashion is "Ocean's 8," bringing in an estimated $41.5 million in its first week out. That's about $10 million better than analysts predicted the film would do.

It's also the best debut of the "Ocean's" series, beating "Ocean's Twelve" by a little over $2 million. But it's important to note if you adjust for inflation, this is actually the worst debut of the franchise. The "Ocean's" trilogy ultimately made $1.2 billion during its theater runs between 2001 and 2007.

That said, you can still count this as a win for the folks at Warner Bros. "Ocean's 8" only cost $70 million to produce, and it's been well-received by audiences and critics so far.

"They're clearly having a fun time doing this, and that enjoyment is infectious, and it helped me kind of overlook some of the flaws," said critic Matt Atchity.

"Ocean's 8" carries a solid 67 percent on the Tomatometer, which is right in line with the other "Ocean's" films.

Now the question is, can "Ocean's 8" stand up to the giant box-office carnivore set to rampage theaters next weekend? "Jurassic World: Fallen Kingdom" made $151 million overseas this weekend, and it's making landfall in domestic theaters next week.

Falling to the No. 2 spot this week is "Solo: A Star Wars Story," bringing in an estimated $15 million in its third week out. As has been noted by just about everybody, "Solo" hasn't lived up to the box-office expectations set by this extraordinary franchise.

If you adjust for inflation, "Solo" had the worst debut of every live-action "Star Wars" film in the franchise, and many analysts think it's going to fizzle out at the box office before it can catch up to the domestic totals of any of those films.

Welp, good thing Disney's got that $2 billion movie that came out last month. I'm sure Han can borrow some of that to keep the lights on.

Taking the third and final spot this week is "Deadpool 2," bringing in an estimated $13.6 million in its fourth week out.

As for next week, Chris Pratt goes back to the dino theme park. Because that went so well the first time.