'Ocean' Of Liquid Water Found On Icy Moon Of Saturn 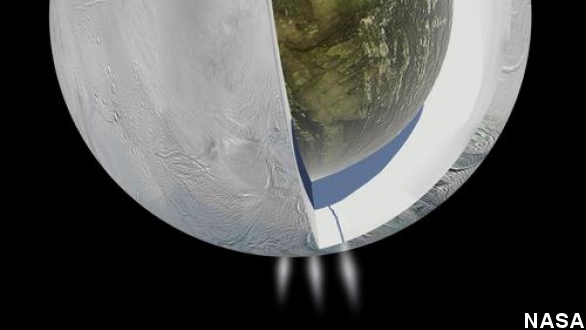 It’s not quite little green men, but scientists say they may have discovered the best candidate for extra-terrestrial life: a tiny ball of ice near Saturn.

According to research published in Science, Enceladus, one of Saturn's moons, has an ocean of liquid water, underneath nearly 25 miles of ice. And under that ocean, a rocky sea floor that could supply that lake with minerals.

Because of that ice, lead researcher Luciano Iess told The Verge that, until recently, the moon “was believed to be geologically inactive — essentially a dead body."

But in 2005, Enceladus shocked scientists with water geysers hundreds of kilometers high. At the time, one researcher said, "This is as astonishing as if we'd flown past Earth and found that Antarctica was warmer than the Sahara." (Via NASA)

Since then, NASA’s nearby spacecraft, Cassini, has seen its mission extended ten years in order to further study Enceladus, which joins fellow Saturn moon Titan and Jupiter moon Europa as possible hosts for extraterrestrial life.

As The New York Times writes, "This tiny, shiny cueball of a moon ... is now the most promising place to look for life elsewhere in the solar system, even more than Mars.”

And ultimately, Iess says the discovery just reinforces that liquid water — and the potential for life — is way more common than we once thought.

"There are potentially habitable environments in the Solar System in places which are completely unexpected.” (Via Sapienza University of Rome)

An informal plan from one NASA scientist to scoop up geyser particles from the moon has yet to leave developmental stage.