Obamas Getting Biopic... About Their First Date 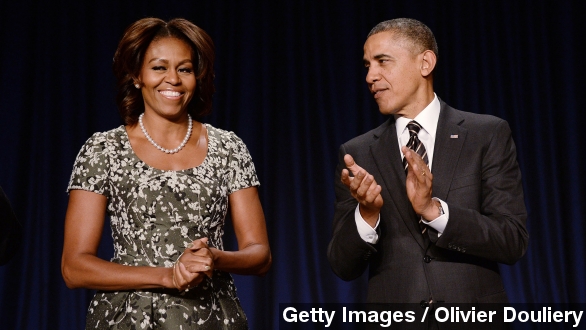 SMS
Obamas Getting Biopic... About Their First Date
By Ben Lawson
By Ben Lawson
December 5, 2014
A movie centered around Barack and Michelle Obama's first date is in the works and so far the announcement has gotten a lukewarm reception — at best.
SHOW TRANSCRIPT

The biopic about America's power couple that we didn't see coming is reportedly in the works.

Deadline reports the independent movie, titled "Southside With You," will chronicle the afternoon of the Barack and Michelle Obama's first date in 1989.

At the time, first-year law student Barack was working a summer job at a law firm in Chicago when he began wooing his younger boss, Michelle. (Video via ABC)

Their first date followed the time-honored tradition of dinner and a movie. Even though it was probably a swell time for the two of them, it doesn't seem like the making of a movie legend.

"Yeah. It was nice," said Michelle.

And so far most of the reaction to the announcement has been equally tepid.

Uproxx calls the plot "so [expletive] wholesome it's borderline patronizing."

A writer for Time takes a pretty sarcastic tone as well, saying "It's time to start thinking about [an Obama] biopic. No, not the kind where he makes major decisions about world events. The kind where he goes on a first date with a pretty lawyer."

And Mashable seems to be a bit more optimistic about the source material calling the first date "fabled."

The screenplay from the film is already being compared to Richard Linklater's critically acclaimed "Before Sunrise" so maybe there is some hope for the picture.

Tika Sumpter is reportedly already on board to play the future first lady.

There's no word yet on who will be appearing alongside her as a young Barack. Filming is planned to begin in July on location in Chicago.