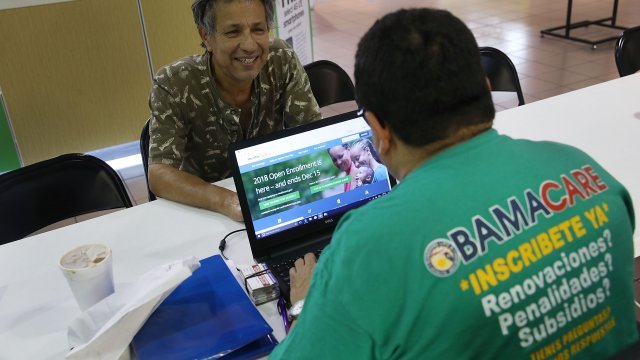 SMS
Obamacare Sign-Ups Strong Despite Trump Administration's Efforts
By Gabrielle Ware
By Gabrielle Ware
December 21, 2017
Numbers are only slightly down from last year when the program had a lot more support.
SHOW TRANSCRIPT

Obamacare sign-ups are going surprisingly strong despite numerous attempts by the Trump administration to hinder and kill the program.

8.8 million people have signed up for 2018 coverage and that doesn't even include state exchanges. The number is only slightly down from the 9.2 million people who signed up last year when the enrollment period was twice as long and the program had a lot more support.

The Trump administration cut advertising for Obamacare by 90 percent.

Centers for Medicare and Medicaid Services said Thursday it spent "just over $1 per enrollee on outreach and education for Exchange coverage compared to nearly $11 per enrollee last year."

It also didn't get a deadline extension like in prior years.

However, the GOP tax bill does get rid of Obamacare's individual mandate requirement, which could cause problems for the exchange in the future.