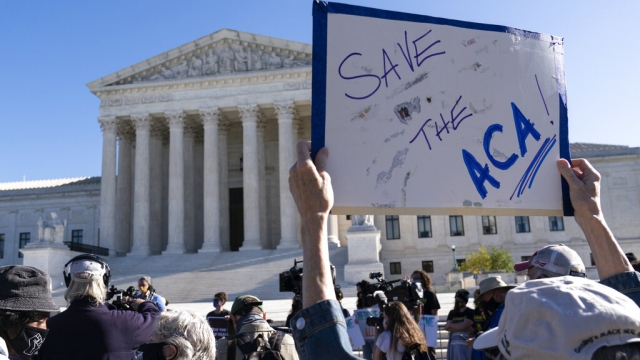 The Supreme Court once again heard challenges that could affect the fate of the Affordable Care Act and the health care coverage of an estimated 20 million people. On Tuesday, many of the justices seemed ready to keep the law in place, in some form.

Outside of the courthouse, protesters gathered to make their opinions known. Meanwhile, over the phone, the justices grappled for nearly two hours with the question of whether a lower court’s ruling that Obamacare’s individual mandate — which requires most Americans to obtain health insurance or face a tax penalty — was unconstitutional since Congress zeroed out the tax penalty in 2017.

The justices seemed more concerned about severability: the notion that if the individual mandate is declared unconstitutional, the rest of the law may fall along with it. Meaning: Can we get rid of one part of the law but keep popular portions, like protections for people with pre-existing conditions?

During oral arguments, many of the justices, including Republican appointees, seemed fixed on the notion that the individual mandate is, indeed, severable from the rest of the law.

“On the severance question, I think it’s hard for you to argue that Congress intended for the entire act to fall if the mandate were struck down, when the same Congress that lowered the penalty to zero, did not even try to repeal the rest of the act. I think frankly that they wanted the court to do that, but that’s not our job,” said Chief Justice John Roberts.

Perhaps, one of the most telling points came from Justice Brett Kavanaugh.

“I tend to agree with you that with the argument that this is severability under our precedents, meaning that we would excise the mandate and leave the rest of the act in place,” said Kavanaugh.

The Trump administration originally backed Republican state attorneys general's push to get rid of the entire law, but changed its mind during an appeal, saying “the declaratory judgment should only reach ACA provisions that injure the plaintiffs.”

A ruling should come down in late spring or early summer. Amber Strong, Newsy, Northern Virginia.