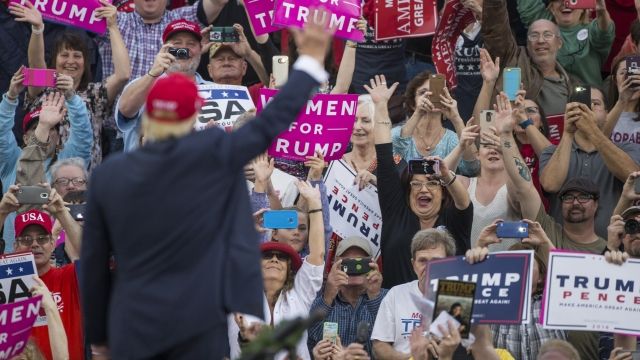 SMS
The Same People Who Voted Trump Likely Benefit From Obamacare The Most
By Eugene Daniels
By Eugene Daniels
December 22, 2016
But voters in some of those states picked the candidate who promised to get rid of it.
SHOW TRANSCRIPT

With President Barack Obama about to leave office, enrollment in Obamacare is growing. The administration announced more than 6.4 million people signed up by the preliminary deadline of Dec. 19 for 2017 coverage.

That's 400,000 more than last year. And that number doesn't include numbers from state-run exchanges in states like New York or Colorado. And people still have until Jan. 31 to enroll.

SEE MORE: Republicans Might Fight To Keep One Part Of Obamacare

And what's really interesting is the five states that had the biggest enrollment are all states Donald Trump won.

"We have to repeal and replace Obamacare," Trump said during a presidential debate.

It's not really clear at this point how the GOP-controlled government will handle health care. We know a repeal will most likely happen, but there doesn't seem to be a consensus on what to do after that.

Currently there's talk of an immediate repeal with an almost three-year transition period to whatever the Trump administration and Congress cook up.

But it seems many who voted for Trump are signing up for Obamacare most often.

The American Communities Project looked at Gallup data and found the types of counties with some of the highest increases in those insured include places with older people, the working class and those living in rural America — groups that overwhelming chose the candidate vowing to get rid of Obamacare.