Is The US Really 'Obsessing' Over Standardized Tests? 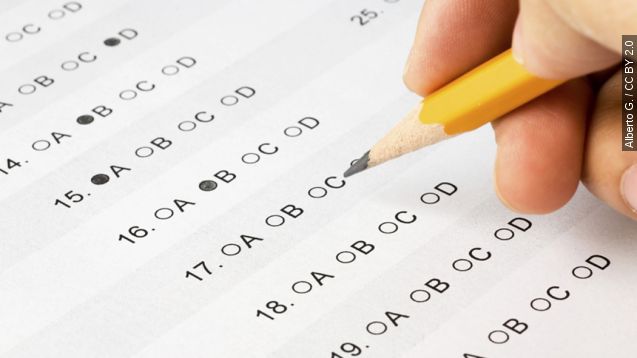 SMS
Is The US Really 'Obsessing' Over Standardized Tests?
By Katie Link
By Katie Link
October 25, 2015
The Obama administration wants to curb the amount of time students spend taking standardized tests to no more than 2 percent of instruction time.
SHOW TRANSCRIPT

"Learning is about so much more than filling in the right bubble. So we're going to work with states, school districts, teachers and parents to make sure that we're not obsessing about testing," President Obama said. (Video via The White House)

Saturday, the Obama administration called for a cap to ensure students spend no more than 2 percent of classroom instruction time taking tests.

So is that a drastic cut back? And how can we really know what is the right amount of time to spend testing students?

According to a study of 66 schools conducted by The Council of Great City Schools, the average student devotes about 20 to 25 hours per year taking mandated standardized tests. This translates to about 2.34 percent of total instructional time for the average eighth grader.

In total, the average student was required to take 112 tests between pre-K and 12th grade.

It's important to note, the council said it's nearly impossible to determine how much testing time is too much since every student learns differently.

But some educators are encouraged by Obama's new stance on the matter because they say students are over-tested.

The president of the American Federation of Teachers said, "The fixation on high-stakes testing hasn't moved the needle on student achievement. It's a big deal that the president and secretaries of education - both present and future - are saying that they get it and are pledging to address the fixation on testing in tangible ways."

But it's hard to determine how a cutback in testing would be rolled out. The president of a group that advocates high testing standards told The New York Times, "There's plenty of agreement that there's too much testing going on. But we have to be careful, as with anything federal, that it doesn't lead to unintended consequences."

The new "testing action plan" released by the Department of Education outlines proposals on how to cut back. The Department plans to use those guidelines to release updated recommendations on standardized tests to states and districts by January.