Obama Wants To Stay On Same Course In Fight Against ISIS 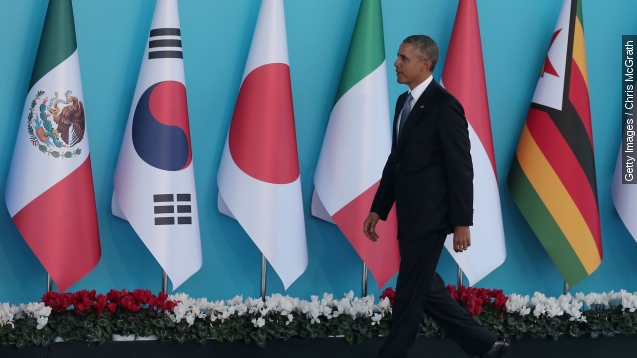 SMS
Obama Wants To Stay On Same Course In Fight Against ISIS
By Kate Grumke
By Kate Grumke
November 16, 2015
President Obama said he has the best military intelligence in the world, and the U.S. coalition currently has the best strategy to fight ISIS.
SHOW TRANSCRIPT

When President Obama spoke about the Paris attacks, he reiterated that he isn't changing his stance on the fight against ISIS.

"While we are very clear-eyed about the very, very difficult road still ahead, the United States in partnership with our coalition is going to remain relentless on all fronts — military, humanitarian and diplomatic. We have the right strategy and we're going to see it through," said Obama.

At the G20 summit, Obama also advocated for political solutions to the Syrian civil war, saying the conflict's end is a prerequisite for regaining territory from ISIS.

The president said the U.S. had no specific intelligence that would have predicted the attack on Paris but that the U.S. did know generally of the threat of an attack against the West.

And, Obama said when it comes to accepting refugees, the U.S. must both welcome those fleeing terrorism and ensure safety through screening.

"And it is very important ... that we do not close our hearts to these victims of such violence and somehow start equating the issue of refugees with the issue of terrorism," said Obama.