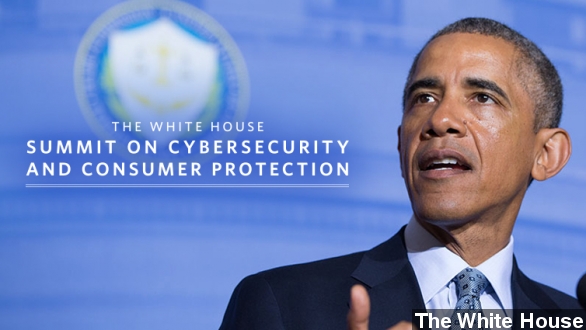 SMS
Obama To Sign Exec Order On Data Security At Cyber Summit
By Jake Godin
By Jake Godin
February 13, 2015
President Obama will speak at a cyber summit Friday after signing an executive order promoting more cooperation between the government and companies.
SHOW TRANSCRIPT

"But today I am here at DHS to highlight how we will work with the private sector to better protect companies against cyberthreats," President Obama said during a speech at the National Cybersecurity and Communications Integration Center on Jan. 13.

President Obama is in California for the White House's first-ever summit on Cybersecurity and Consumer Protection in Stanford on Friday.

One of the first orders of business is the signing of an executive order that'll encourage companies to share any information regarding cyberthreats between each other and the federal government. (Video via U.S. Department of Homeland Security)

The hope is that if companies are sharing cybersecurity information with each other and the government, and doing so quickly, then everyone will benefit.

Target, Home Depot, JP Morgan Chase and, most recently, Anthem have all been subject to cyberattacks, which have compromised the security of thousands of their customers.

Both Target and Home Depot were hit by the same type of malware attack in the past — Target in 2013, then Home Depot in 2014. If they had a plan to share information regarding the attack, Home Depot may have been able to avoid an attack. (Videos via Target, Home Depot)

Along with a push for more government-private collaboration in cybersecurity, a number of other issues will be discussed at the summit, including payment technologies, improving password authentication and international law on cybersecurity. (Video via The White House)

CEOs and chief security officers from various banks, financial services, tech industries and information security companies will be there, perhaps the biggest of which will be Apple CEO Tim Cook. CEOs for Google and Facebook opted instead to send network security representatives.

As an alternate reason for the CEO no-shows, CNN’s Kevin Liptak plays with the idea there may be some residual tension left between Silicon Valley giants and the White House over privacy. (Videos via Google, Facebook)

The summit is set to begin on the campus of Stanford University at 8:45 a.m. Pacific time with an address from President Obama at 11:15 a.m. The event will run until 4 p.m.