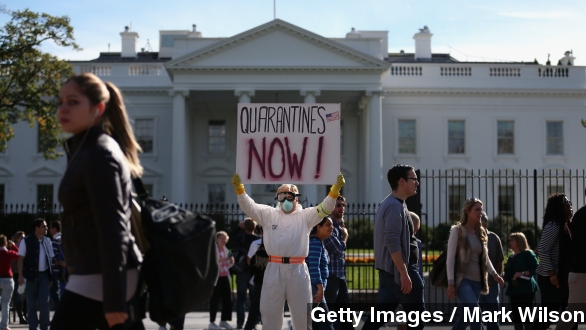 AMBER VINSON VIA KXAS: "I'm so grateful to be well and first and foremost I want to thank God. ... While this is a day for celebration and gratitude, I ask that we not lose focus on the thousands of families who continue to labor under the burden of this disease in West Africa."

NINA PHAM VIA FOX NEWS: "I join you in prayer now for the recovery of others including my colleague and friend Amber Vinson and Dr. Craig Spencer."

Both Vinson and Pham are believed to have contracted the virus from the first patient diagnosed in the U.S., Thomas Eric Duncan.

While both nurses recovering is big news in the U.S., President Obama spent the majority of his Tuesday news conference addressing America's efforts in West Africa.

PRESIDENT OBAMA VIA BBC: "We're going to have to stay vigilante here at home until we stop the epidemic at its source."

Though Obama did circle back around to the domestic response to the virus, noting government quarantine policies are not meant to discourage American workers from volunteering in Africa.

PRESIDENT OBAMA VIA NBC: "America cannot look like it is shying away because other people are watching what we do. ... Those workers who are willing and able and dedicated to go over there and do a really tough job, that they are applauded, thanked and supported."

Obama's comments might refer to the recent case of nurse Kaci Hickox, who was quarantined against her will in New Jersey after coming back from West Africa despite not showing any symptoms of Ebola according to her attorney.

Vinson was transported to Emory Hospital in Atlanta, Georgia after contracting Ebola but will now return to her home in Dallas after being released Tuesday.