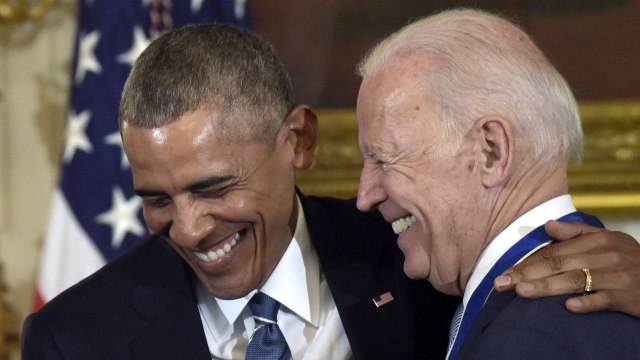 SMS
Obama Displays His Political Muscle As He Stumps for Biden At The DNC
By Shira Tarlo
By Shira Tarlo
August 19, 2020
Barack and Michelle Obama both earned the coveted keynote speaking slot at the DNC, showing the outsized influence of the former First Family.
SHOW TRANSCRIPT

One of the most popular Democrats in the nation is set to make the case for Biden during day 3 of the DNC.

"Choosing Joe to be my vice president was one of the best decisions I ever made, and he became a close friend, and I believe Joe has all of the qualities we need in a president right now," former President Barack Obama said earlier this year in announcing his endorsement of Biden.

It will be the second time in three nights that an Obama will have the coveted keynote speaking slot at the convention, showing the outsized influence the former First Family still holds in the Democratic Party.

"So let me be as honest and clear as I possibly can, Donald Trump is the wrong president for our country," former First Lady Michelle Obama said Monday night during her convention speech.

The former president's popularity has steadily risen since leaving office — and he has used his political power to help Joe Biden, joining him on the virtual campaign trail and headlining several fundraisers on his behalf.

"There's nobody that I trust more to be able to heal this country and get it back on track than my dear friend Joe Biden," the former president said in June during a virtual grassroots fundraiser for Biden.

He raised over $11 million dollars in one night, and reunited for a “socially-distanced conversation" on everything from COVID-19 to President Trump.

"You know what it's like as much as anybody to be in the White House during a crisis,"  Obama told Biden during the conversation.

Though he has often refrained from calling out his successor by name, his criticisms has been pointed and clear.

"But even as we sit here there are those in power that are doing their darnedest to discourage people from voting," the former president said in July as he eulogized the late Rep. John Lewis, taking aim at President Donald Trump's efforts to discourage mail-in voting amid the pandemic.

Biden has frequently invoked his former boss on the trail — well before earning his formal endorsement.

"I was vetted by he and 10 serious lawyers he appointed to go look back at everything on my background. Everything. And he selected me," Biden said at a rally last year in South Carolina. "I’ll take his judgment of my record, my character, and my ability to handle the job over anyone else's."

It boosted his standing among Black voters during the primaries, as well as remind Democrats of the leadership many now yearn for.

"Being associated with a time that's less tense, less angry, less partisan — even though it was very partisan in those days — but the image of it compared to now makes it seem almost milquetoast," explained Leonard Steinhorn, a professor of communication at American University, in an interview with the Associated Press. "That may help Joe Biden, too, because a part of the message he's communicating, which is that our nation has to heal, we have to unify, we have to overcome these bitter divisions and this is all about, as Joe Biden says, the soul of the nation."