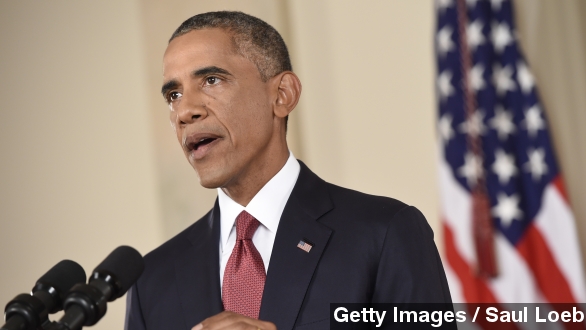 SMS
Obama Says Sony Hack Not An Act Of War, U.S. Weighs Response
By Ben Lawson
By Ben Lawson
December 21, 2014
Obama called the hack on Sony an act of vandalism rather than war, saying the U.S. will have a proportional response. What will that look like?
SHOW TRANSCRIPT

As the U.S. wrestles with deciding how to respond to the cyberattack on Sony Pictures, CNN aired a taped interview with President Obama on Sunday where the commander-in-chief said he did not consider the hack an act of war.

"I don't think it was an act of war," Obama told CNN's Candy Crowley. "It was an act of cyber vandalism that was very costly, very expensive. We take it very seriously. We will respond proportionally."

Just what that proportional response could be is still unclear; after all, there's no precedent for this kind of situation.

U.S. officials have come out and said they believe North Korea to be behind the attack on Sony. (Video via Euronews)

The Wall Street Journal spoke with security officials who said there are directives in place to protect critical infrastructure, such as the power grid, from cyber attacks.

But the concept of a private company, much less an entertainment company, being the subject of such an attack from an outside government over a satirical film is not something officials foresaw. (Video via Sony Pictures Entertainment / "The Interview")

Making things even more complicated are the differing opinions in Washington on the political significance of the attack.

Senator John McCain went on CNN not long after Obama and called the Sony hack "a manifestation of a new form of warfare," further elaborating, "When you destroy economies, when you are able to impose censorship on the world and especially the United States of America, it's more than vandalism."

It's also hard to define what constitutes an act of cyberwar. A NATO manual defines it as, "a cyber operation, whether offensive or defensive, that is reasonably expected to cause injury or death to persons or damage or destruction to objects."

Seeing as no person or structure was physically damaged, the Sony hack would not fall under that definition. But it's hard to argue that the hack will not significantly hurt Sony's business. So what would a "proportional response" from the U.S. entail?

One idea that has been tossed around is launching a counter-hack, possibly with the help of China. China has longstanding ties to North Korea and much of North Korea's telecommunications systems run through Chinese-operated networks. (Video via Arirang News)

An official told The New York Times, "What we are looking for is a blocking action, something that would cripple their efforts to carry out attacks." But that has the potential to escalate things even further.

There is also the option of designating North Korea as a terrorist sponsor. A former NSA research scientist told Business Insider doing so would, "set in motion a wider range of legal authority, US government/military resources, and international options."

The country was designated a terrorist sponsor until 2008, so this isn't exactly a game-changer. It would also put a damper on any potential diplomatic relations, especially those regarding North Korea's controversial nuclear program. (Video via ODN)

Another option is to increase the economic sanctions put on the country. The Daily Beast says those sanctions were "crippling" to North Korea when they were last used by the Bush administration a decade ago.

North Korea flat out denies it had anything to with the attack and instead accuses the U.S. government of being behind the making of "The Interview," the movie that is believed to be the motivation for the hack.