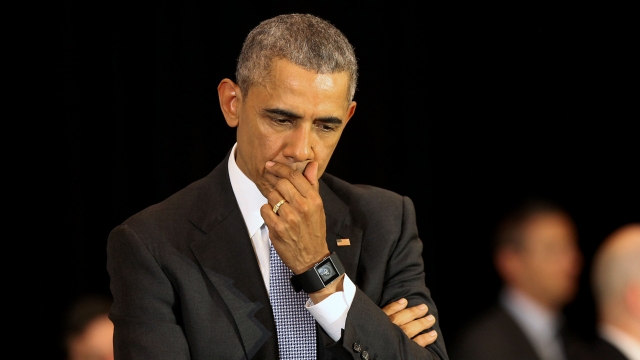 SMS
Obama Says Lack Of 'Day After' Plan In Libya Is His Worst Mistake
By Eugene Daniels
By Eugene Daniels
April 10, 2016
In his final year, President Obama has been touting his accomplishments, but now, he's admitted to what he thinks is his "worst mistake."
SHOW TRANSCRIPT

During their last year in the White House, presidents spend quite a bit of time publicly reflecting on their legacy, and President Obama is no exception. In a wide-ranging interview with Fox News, the president shared what he thought was his worst mistake in office.

"Probably failing to plan for the day after what I think was the right thing to do in intervening in Libya," President Obama told Fox News' Chris Wallace.

This isn't the first time the president has criticized the handling of Libya after the ousting of dictator Moammar Gadhafi in 2011. In an interview with The Atlantic, Obama said the operation was planned carefully, but the country is currently a "mess."

And in a speech to the U.N. General Assembly in September, President Obama said, "Even as we helped the Libyan people bring an end to the reign of a tyrant, our coalition could have and should have done more to fill a vacuum left behind."

But Obama seems to feel the blame is not solely America's. He told The Atlantic the tribal division in Libya was "greater than" expected and that, at the time, he had "more faith in the Europeans, given Libya’s proximity, being invested in the follow-up."

The president's interview with Fox News wasn't all negative. Obama said his best day in the White House was when health care reform passed during his first term.

This video includes images from Getty Images and clips from The White House and U.S. Department of State.