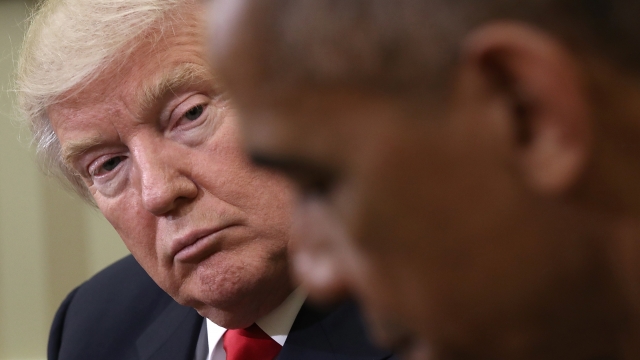 SMS
Obama Says He Told Trump To Trust Intelligence Agencies
By Lindsey Pulse
By Lindsey Pulse
January 8, 2017
Obama sat down on ABC's "This Week" and talked about the president-elect and running the country.
SHOW TRANSCRIPT

"There are going to be times where the only way you can make a good decision is if you have confidence that the process is working," Obama said.

Obama told ABC's "This Week" he recently had a conversation with the president-elect about decision-making in the White House. He told Trump that when it comes to running a country, "You can't manage it the way you would manage a family business."

It called the campaign "multifaceted" and said its purpose was to undermine public faith in the U.S. democratic process and harm Hillary Clinton's electability.

The declassified report released by the Office of the Director of National Intelligence said, "Putin and the Russian Government developed a clear preference for President-elect Trump" and used government agencies, paid social media "trolls" and state-sponsored media outlets like RT and Sputnik to influence the election.

While Trump did recently acknowledge that Russia waged cyberattacks against the U.S., he's been reluctant to accept evidence that the hacking operation had any effect on election results.

Still, Obama said officials in the intelligence community are pretty forthcoming with what they know. He told Trump he has to trust that the people in charge are giving their best assessments.

This all comes as the U.S.' relationship with Russia has gotten increasingly tense. In late December, Obama issued an executive order that sanctioned Russia for suspected election interference and other cyberattacks. It also booted 35 U.S.-based Russian officials.

Trump has said in the past he's committed to bettering ties with Russia, and many hope his administration will work to repair that relationship.