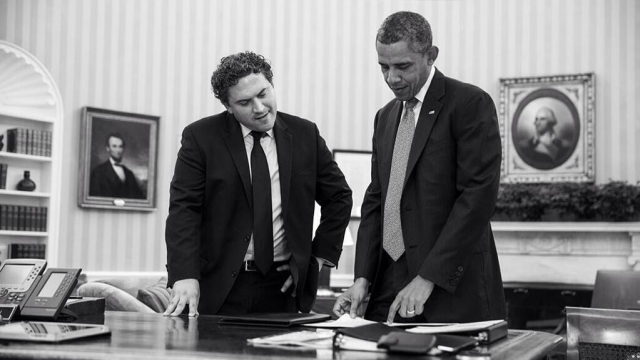 Barack Obama has a way with words, and words have forged a way for Cody Keenan.

"It's a humbling profession," Keenan explained. "We did 3,577 speeches and statements while he was in office."

Keenan — now a member of the former president's personal staff — grew from campaign intern to Obama's chief speechwriter in 2013. But he's the first to tell you he got by with a little help from his friends.

"I was never the sole writer. Barack Obama was a writer before any of us came around. He reminds us that he wrote the 2004 [Democratic National Convention] speech that made him famous all by himself — as if we needed the reminder," Keenan said.

And when Obama wasn't pitching in, it was Keenan's wife, Kristen. She wore many hats in the White House, one of which was as Keenan's fact-checker. He jokes that she got paid to tell him he's wrong. 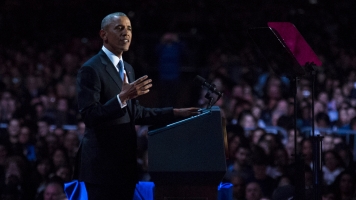 During Obama's farewell address, the president said, "If you're tired of arguing with strangers on the internet, try to talk with one in real life."

Turns out, the line that got much laughter and applause came from Keenan's wife. Keenan thinks it resonated with so many people because it highlights one of the greatest challenges in politics right now: divisiveness.

Keenan said writing for a president speaking to a divided nation is challenging.

"It's always a challenge, especially someone who, you know, rose to power and first became famous by insisting that we were not a divided nation," he said.

It was a challenge Keenan took on often — most notably in Obama's speech in Selma, Alabama, that commemorated the 50th anniversary of "Bloody Sunday." And again after mass shootings in Tucson, Arizona; Newtown, Connecticut; and Charleston, South Carolina.

Keenan's frustration shone through when asked about how he approaches situations where a nation is in mourning, but there is an issue, like gun control, that needs to be discussed.

"One of his responsibilities is to be a consoler in chief. And you know, we had to do that way too many times," Keenan said. "Ninety percent of the country supported background checks. I think 70 percent of NRA families supported background checks. And I think the day that failed in the Senate, you know only in the United States Senate could something fail with 54 votes, and that was the most cynical I ever got about Washington. And it was one of the very few times that I saw [Obama] pissed off, when that failed." 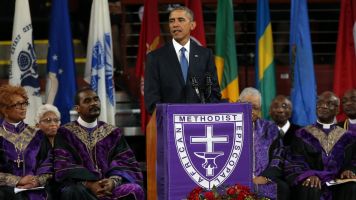 Keenan admits to screwing up "all the time" during his tenure at the White House, telling me that the president was gentle with his criticism and quiet with his praise. The best he would ever get was the recognition that something was "pretty good" or that it "worked."

And a lot of Keenan's writing worked for Obama. According to The New York Times, the president christened him with the nickname "Hemingway" for the work churned out by the bearded and burly Keenan. Turns out, the moniker doesn't come from strong writing, but rather an appreciation for strong drinks.

"The whole Hemingway thing is bullshit. First of all, there is nothing in a political speech that sounds remotely like Hemingway. And it wasn't because of the beard. I actually didn't tell this story in the White House. I'm freer to tell it now. One night, we were in Paris, and it was the 70th anniversary of D-Day. He was like, 'This was great, let's just lock it down,'" shared Keenan, referencing a speech he wrote for the president. "So, a bunch of us from the White House just decided to go out all night in Paris, and we went back to the hotel at like 6 in the morning. So when we got in, someone dimed us out to the president. He came back on the plane and he was like, 'Oh, 'A Moveable Feast' is back.'"

For the record: "A Moveable Feast" is Ernest Hemingway's memoir documenting his life as a young writer in Paris doing young people things. It's a classic comedy I probably would've learned if I had treated college like Keenan.

"I was just a good student and a voracious reader. And I think that more than anything else prepared me to be a speechwriter, was reading," Keenan reflected.

The speechwriter said "The Color Purple" had the largest impact on his life because it exposed him to lives and pain that was nothing like his own. Keenan grew up in Chicago in a middle-class family and recognized he had every chance to succeed, something he noticed all were not fortunate to have. Once he noted that injustice, it drove him into public service.

Keenan — who was part of a team that led the country through the longest stretch of job creation in history, gave 20 million people health insurance and killed Osama Bin Laden — said it's important to be part of something bigger than yourself.

"You can give a big picture answer, and it's the only way this country has ever worked. But, I think maybe in our generation, we just kind of crave something bigger and full of purpose. You know, I've always been searching for a sense of purpose. I found it in politics and public service. I found it on the first campaign. I found it every day in the White House. I have no idea where I'm going to find it now. That's the scary thing, being outside of the White House, but, you know, especially on a campaign, you gain this family because you're all working together for 20 hours a day for no money and busting your ass and searching for cheap beer at night," Keenan explained.

He had no preference when it came to cheap beer and candidly discussed how Pabst Blue Ribbon "went hipster." His authenticity seemed to peak in that moment, until the accomplished 36-year-old man revealed his next goal in life.

"I think the first thing we'll try to accomplish is getting a dog, and then we'll move onto children," Keenan revealed.

When it comes to canine breed preference, Keenan said that's still up for debate.

"I want a big dog. She wants a small dog. Marriage is about compromise," Keenan said smiling.