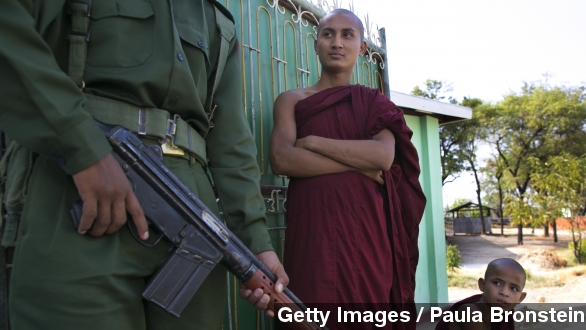 SMS
Obama's Second Burma Visit Spotlights Reforms In Reverse
By Jake Godin
By Jake Godin
November 13, 2014
Two years ago, President Obama seemed optimistic about reforms within the Burmese government, but in a recent interview he warned of "backsliding."
SHOW TRANSCRIPT

PRESIDENT OBAMA VIA THE WHITE HOUSE: "But I stand here with confidence that something is happening in this country that cannot be reversed."

President Obama is in Burma, officially known as Myanmar, for the Association of Southeast Asian Nations and East Asia summits. When he was last in the country in 2012, he praised Myanmar for its progress in reforms. But now, it seems he's worried that progress is reversing. (Video via Fox News)

In an interview with a Thai-based Burmese magazine, Obama said although there has been some progress with reforms in the former dictatorship, they seem to be slowing down or backsliding.

He specifically referred to continued human rights abuses in the country and reports of forced labor, rape and extrajudicial killings. (Video via Human Rights Watch)

So what's impeding reforms? The Burmese military, according to some. Although it turned over power to civilian rule in 2011, the military still holds veto power on any constitutional amendments.

The military has also been key in constitutionally barring Burmese opposition leader Aung San Suu Kyi from becoming president. The former political prisoner has seen ethical issues cast doubt on her own leadership. (Video via The White House)

But the BBC notes Suu Kyi recently expressed frustration on the slow progression of reform in the country with her saying the U.S. may have been "overly optimistic" about the reform process.

And speaking to Politico, a member of Human Rights Watch blamed slowing reform on the U.S. for easing sanctions too quickly, saying "Once the bulk of the financial sanctions were lifted, right after that, reforms began to stall, which is why we urged them not to do it in one go."

Still, as one BBC writer points out, daily life in Burma is making progress as two new foreign phone companies set up shop to give Internet and mobile phone access to more of the country's citizens.

Obama is due to meet Burma's president on Thursday and Aung San Suu Kyi on Friday.