Obama's Road To 'Ally Of The Year' Was An Evolving One 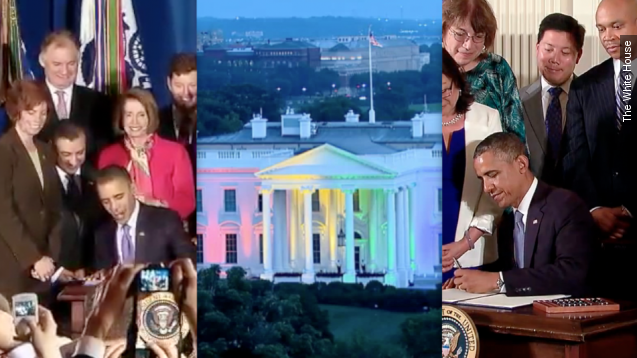 SMS
Obama's Road To 'Ally Of The Year' Was An Evolving One
By Eugene Daniels
By Eugene Daniels
November 10, 2015
President Obama has been named "Ally of the Year" by Out magazine, but the road to the title took a little while.
SHOW TRANSCRIPT

President Obama is now the first sitting president to be photographed for the cover of an LGBT magazine.

He posed for Out magazine's annual Out 100 issue, which names the president the "Ally of the Year." The article says "whichever way you look at it, this president and his administration have ushered extraordinary change into the lives of LGBT Americans."

The magazine definitely has a point. It's hard to argue the Obama administration has been anything but great for the LGBT community, especially when it comes to marriage equality. But getting to that point did take some time.

Believe it or not, it started in the '90s when Obama was just a candidate for the Chicago Senate. According to Windy City Times, Obama filled out a candidate questionnaire saying he favored legalizing same-sex marriage. (Video via Cambridge Public Library)

That view changed publicly again in 2012.

"I've been going through an evolution on this issue, it is important to me to affirm that I think same-sex couples should be able to get married," the president told ABC's Robin Roberts.

By saying he evolved, President Obama went on the offensive to stop his detractors from calling him a flip-flopper. And no matter what you think the reason behind Obama's evolution was, his change of heart has been backed up with action.

He's repealed "don't Ask, don't tell," signed an executive order to protect LGBT workers and gave the White House a makeover after same-sex marriage became legal nationwide, among other actions. So despite the late hour conversion, President Obama has definitely earned his new title. (Videos via the White House, NBC)