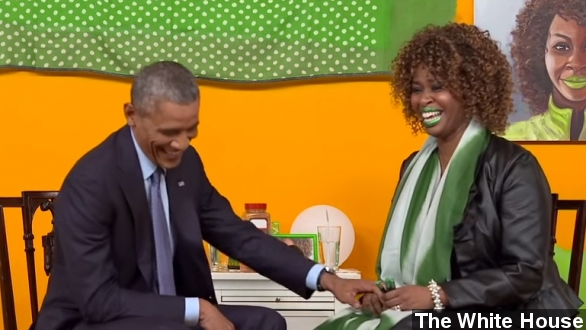 SMS
Obama's Q&A With YouTube Stars Is As YouTube As It Gets
By Jasmine Bailey
By Jasmine Bailey
January 23, 2015
YouTube stars Hank Green, GloZell Green and Bethany Mota sat down to interview President Obama on Thursday.
SHOW TRANSCRIPT

"Mr. Obama, you know the president of the United States. My subscribers want to know about education, the lack of jobs. ... Racial profiling."

The president was in for a crazy ride when he sat down for three back-to-back interviews at the White House Thursday.

"If you had any super power what would it be?"

Obama answered, "I'd love to be able to speak any language."

If you didn't recognize any of the people asking President Obama those ... unique questions, all three of them are pretty big YouTube stars.

Hank Green of the vlogbrothers,"Fart is one of the oldest words in the English language."

And DIY queen Bethany Mota, "Party hats are a must and these are super, super easy to make."

Honestly, the 45 minute video got a little hard to watch at times.

A writer for Mashable called the whole thing "totally weird," which just about sums it up.

"I have green lipsticks, one for your first wife," said GloZell.

"First wife? Do you know something I don't know? ... I'm going to ask Michelle to maybe try it on tonight," replied Obama.

But for all of its awkwardness, there were a few golden moments. "This is a picture of me holding a receipt from my pharmacy. ... Before I had insurance I could not take this medication. ... So ObamaCare has worked," said Hank.

So maybe you're wondering why the president of the United States decided to go through with the wacky interviews. Well, As VentureBeat points out, between healthcare and education reform, it's important to reach out to younger demographics.

You might remember when Obama appeared on Funny or Die’s “Between Two Ferns” with Zach Galifinakis. That video raked in millions of views on YouTube and VentureBeat noted drove a similar amount of traffic to the HealthCare.gov website.

Granted, that video was made with the intention of providing information about HealthCare.gov. Thursday's triple whammy covered a range of topics, from Cuba, to technology, to the simple question of why young people should even be interested in politics.

After the interview sessions, MSNBC talked to Glozell and Hank about the experience. "I felt like the president took time to answer the questions that I asked him," said Hank.

You can check out all the interviews in their entirety on The White House YouTube channel.