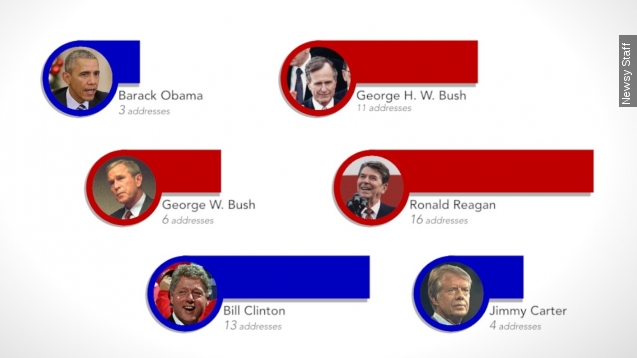 SMS
Obama's Oval Office Speech Is A Relative Rarity
By Matt Picht
By Matt Picht
December 6, 2015
President Barack Obama isn't as fond of delivering speeches from the Oval Office as other modern presidents have been.
SHOW TRANSCRIPT

For the third time in his presidency, President Obama will address the nation from behind his desk in the Oval Office.

Comparatively speaking, this is a rare event.

The televised tradition dates back to President Eisenhower in 1957, when he announced federal troops would enforce desegregation in Little Rock, Arkasas.

It's a format presidents have used for their most significant and important speeches.

But Obama prefers to use the doorway of the East Room for big events, like proposing military intervention in Syria, announcing the death of Osama bin Laden or unveiling the deal about Iran's nuclear program.

His two previous Oval Office speeches were on the Deepwater Horizon oil spill, and the end of the combat mission in Iraq.

Obama's latest speech will discuss the shooting in San Bernardino, California. He'll also talk about the broader threat of terrorism and ISIS.

This video includes images from Getty Images and the National Archives and Records Administration, and music from Birocratic / CC BY ND 3.0.