Obama's Next Veto Target: No Child Left Behind Overhaul 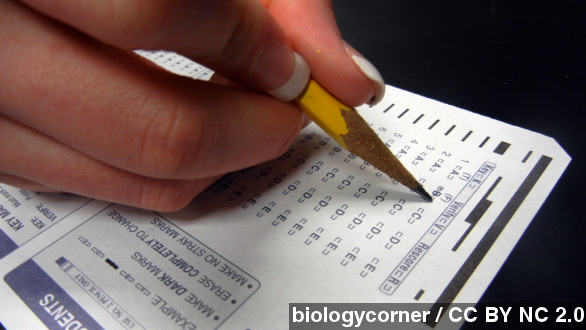 On the heels of his veto of a bill to authorize the Keystone XL pipeline, President Obama is threatening to veto the Republican-backed overhaul of No Child Left Behind — calling it a "significant step backwards." (Video via The White House)

It's been 13 years since the widely criticized education bill was signed into law.

"And we owe the children of America a good education. And today begins a new era, a new time in public education in our country," President George W. Bush said in 2002.

Members of both parties acknowledge the legislation never lived up to its name. The goal was for virtually all the nation's students to perform at grade level by 2014, and that's far from the case. (Video via U.S. Department of Education)

"We want high standards, and we'll give you flexibility in return," President Barack Obama said in 2012.

Now, 43 are exempt from the more cumbersome parts of the law in exchange for adopting other standards like the equally controversial Common Core.

And that's partly because the legislation itself is massive. At over 600 pages long, it includes all sorts of things for lawmakers to disagree over.

The new GOP-sponsored overhaul would keep annual federal testing requirements but give states greater authority to set their own standards and decide if schools are meeting them. (Video via U.S. Department of Education)

But critics of that approach say states would then have every reason to set low targets, with the poorest schools paying the price.

The measure passed out of committee earlier this month without a single democrat voting in favor. It's expected to get a vote in the House sometime this week. (Video via House Committee on Education and the Workforce)