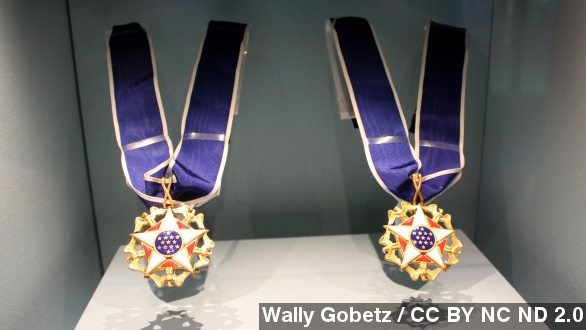 The Presidential Medal of Freedom is the highest civilian honor awarded by the U.S., and President Obama has just named 19 new candidates for the prestigious prize.

You're probably familiar with some of the more famous faces on the list, like singer Stevie Wonder, actress Meryl Streep, newsman Tom Brokaw and composer Stephen Sondheim.

But this year, the president's awards were especially focused on civil rights, honoring those who helped champion racial equality in the U.S. and break down racial barriers in specific fields.

The three men were executed by members of the Ku Klux Klan while traveling to Mississippi for the "Freedom Summer," a volunteer movement to register African American voters. Their deaths shocked the nation, and the three became icons in the fight for equal rights.

The president will also honor professional golfer Charles Sifford, who was instrumental in desegregating the Professional Golfing Association. He was 40 years old when the league finally dropped its "Whites Only" rule in 1961 — he went on to win PGA titles in 1967 and 1969. (Video via World Golf Hall of Fame)

And another posthumous medal will be awarded to Alvin Ailey, the choreographer who is credited with furthering African-American representation in modern dance. His "Revelations" still ranks among the most popular modern dance performances. (Video via Alvin Ailey American Dance Theater)

Finally, there's John Dingell, the Detroit Representative who holds the record for longest-serving member of Congress. Dingell was a constant supporter of civil rights legislation, backing all but one of the Johnson administration's bills on the subject.

Civil rights has been a recurring theme in the administration's Medal of Freedom choices — last year, Obama awarded medals to Bayard Rustin and C.T. Vivian, two prominent leaders of the civil rights movement.

The Medals of Freedom will be awarded during a White House ceremony on Nov. 24th.