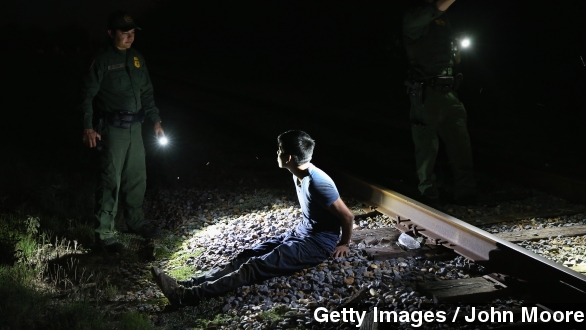 "Mass amnesty would be unfair. Mass deportation would be both impossible and contrary to our character. What I'm describing is accountability. You can come out of the shadows and get right with the law," President Obama said during his address from The White House.

Up to 5 million undocumented immigrants will get protection from deportation and the ability to work legally in the United States.

That’s the idea from President Obama’s executive action on immigration. He made his announcement Thursday night — and detailed the beneficiaries include undocumented parents of legal permanent residents and U.S. citizens.

“Make no mistake, when the newly elected representatives of the people take their seats, they will act,” incoming Senate Majority Leader Mitch McConnell said Thursday.

The plan — as you just heard — has Republicans in Congress vowing to put up a fight.

But remember — this is an executive action, so there’s not a whole lot critics can do to stop it. Technically, they could sue, or they could hold up funding for the plan.

In any case — to his critics, President Obama has on several occasions blamed his opponents for not passing an immigration bill.

“I would sign it into law today, and Washington would solve a problem in a bipartisan way,” he said in a speech in June.

He has in fact suggested that was really the only way to get reform.

So Thursday night is a bolder step than he’s suggested he was willing or able to do in the not-so-distant past. Under the new plan, 5 million people will need to apply for what’s called “deferred action status.” As long as they don’t commit a serious crime, they would get protection from deportation for three years.

What the plan would not do:

- Undocumented immigrants would not get access to Obamacare or other federal benefits,

- They do not become eligible for citizenship or green cards,

- And they do not get a free pass from back taxes.

Though some have suggested that last fact means beneficiaries of the plan get payments under the Earned Income Tax Credit.

It’s important to point out that “deferred action” isn’t a legal status. All it really means is that the president has given immigration officials a priority list: Pursuing deportation of criminals and other groups ahead of the beneficiaries of the new plan.