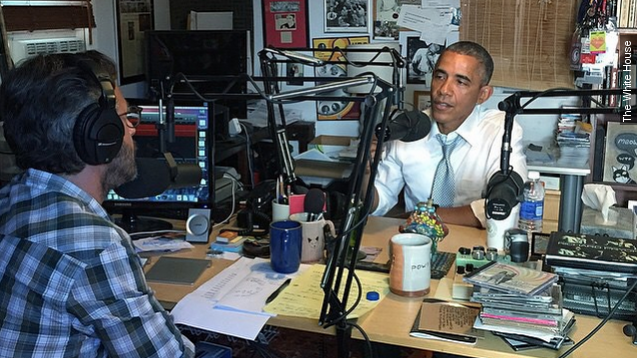 "Am I in the orange chair?" asked President Barack Obama.

"This is pretty cool," Obama said.

When the leader of the free world sat down for an interview with a comedian who records a podcast from his garage, we saw a side of President Obama we don't normally see, especially because this is a format we haven't seen a president embrace before. (Video via The White House and ABC / "Jimmy Kimmel Live")

Obama used the interview with comedian Marc Maron to promote his messages on gun control, race, the Affordable Care Act and the racially motivated attack on a church in Charleston, South Carolina, last week.

But, of the hourlong interview, the media focused on just one word. "Racism, we are not cured of it. And it's not just a matter of it not being polite to say n----- in public. That's not the measure of whether racism still exists or not. It's not just a matter of overt discrimination. Societies don't, overnight, completely erase everything that happened 200 to 300 years prior."

Despite the media's focus, once again, Obama's team showed it's trying to embrace less-traditional platforms for the president to get the public on his side.

In February, Obama made a video for BuzzFeed to promote the Affordable Care Act. "The deadline for signing up for health insurance is February," said Obama.

And last year, Obama was on Funny or Die's "Between Two Ferns" series. "Have you heard of health care dot gov?" said Obama.

"OK, let's get this out of the way, what did you come here to plug?" said Zach Galifianakis.

"Well, first of all, I think it's fair to say, I wouldn't be with you here today if I didn't have something to plug," said Obama.

But some were disappointed this interview seemed more formal than a typical episode of the podcast.

James Joiner wrote in The Daily Beast: "The hope was the usually irascible host would wrest some juice from his seemingly reserved guest. Instead, all we got was an hour and 15 minutes of slightly more colloquial rhetoric."

You can listen to the full interview at potus.wtfpod.com.