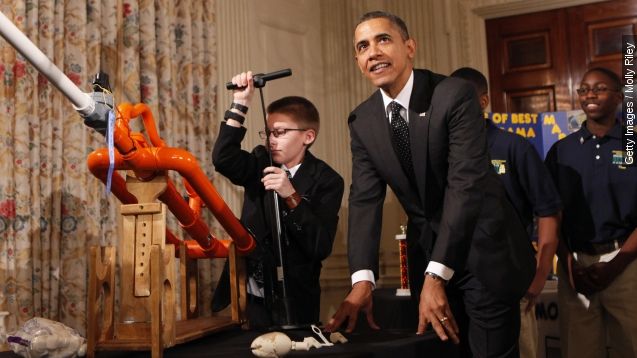 SMS
Obama Keeps Calling For Better STEM Students, So How's America Doing?
By Eugene Daniels
By Eugene Daniels
January 12, 2016
In his 2010, 2014 — and now 2016 — State of the Union addresses, Obama has called for more funding for science, technology, engineering and math.
SHOW TRANSCRIPT

"... Offering every student the hands-on computer science and math classes that make them job-ready on day one ..." President Obama said in his final State of the Union address.

President Obama pushing for stronger STEM students during his State of the Union address isn't new.

"... reform that raises student achievement; inspires students to excel in math and science ..." said President Obama during his 2010 State of the Union address.

It's popped up in some shape or form in all of the president's State of the Union addresses. But how are American students doing compared to their peers in STEM learning?

According to the Program for International Student Assessment, or PISA, better but still not great.

PISA is one of the largest international exams. Math and science PISA scores for American 15-year-olds put them in the middle of the pack compared to other countries. The U.K., Canada and South Korea, among others, all tested higher.

Actual scientists were even more critical. The American Association for the Advancement of Science found just 16 percent of its members said the same.