Obama Hits All 50 States With Visit To South Dakota 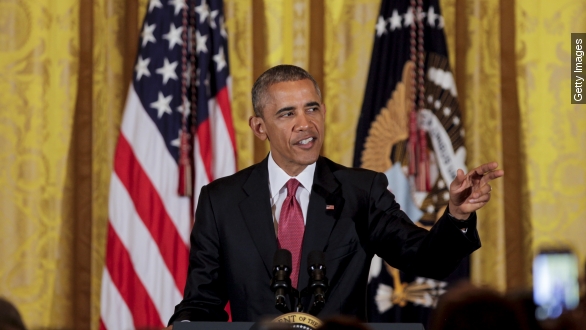 With his trip to South Dakota on Friday, President Obama became one of only a few sitting presidents to visit all 50 states.

In April, an 11-year-old named Rebecca wrote to President Barack Obama saying her heart was broken because he had yet to visit her state of South Dakota. She even pointed out some of the sights he could see there, like Mount Rushmore and coyotes.

Well, Rebecca's wish is about to come true because Obama is headed to South Dakota Friday.

The purpose of his visit is to give the commencement address at Lake Area Technical Institute's graduation ceremony.

The Argus-Leader points out the last time a U.S. president visited the Mount Rushmore State was 13 years ago in 2002, when George W. Bush helped drum up support for Senator John Thune.

The Capital Journal reports prior to Obama's visit, the state had only been visited by sitting presidents 14 times since 1976. A political science professor said the reason South Dakota isn't a popular spot is because of its distance from Washington, D.C. and a small population of less than one million people. (Video via South Dakota Governor's Office of Economic Development)

Obama's trip will also mean he's visited all 50 states during his term — something only a handful presidents have been able to make happen.

Both Bill Clinton and George H.W. Bush made it to all 50, which is pretty impressive when you take into account that Bush only served one term in office.

Obama's visit to South Dakota will be a short one as he will be heading back to D.C. after the commencement. We're hoping that before that, he'll get the chance to meet Rebecca.