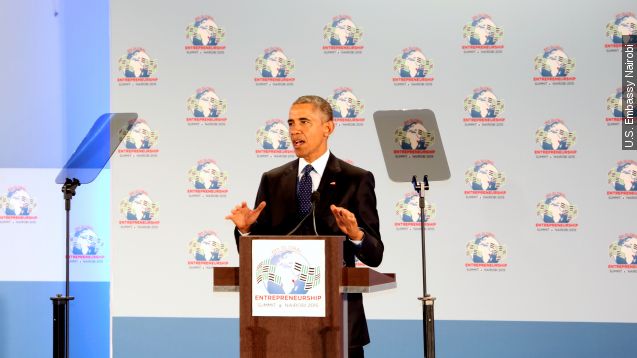 It was a homecoming, of sorts. (Video via Voice of America)

At least that’s how the local media billed President Obama’s trip to Kenya. (Video via NTV)

"I’m proud to be the first U.S. president to visit Kenya. Obviously, this is personal for me. There's a reason why my name is Barack Hussein Obama," President Obama said.

This is Obama’s first trip to his father’s homeland since becoming president.

Officially, he’s there to meet with his Kenyan counterpart, Uhuru Kenyatta, and to co-host the Global Entrepreneurship Summit — a meeting of governments, investors, and entrepreneurs.

While in Kenya, the president also defended his $7 billion plan to expand electricity to 20 million African households and business. Two years after its launch, the program has yet to turn on any lights. (Video via Voice of America)

"The next time someone’s interested in how electricity is generated, go back home and find out how long it takes to turn on a power plant," President Obama said Saturday.

President Obama heads next to Ethiopia, where he’ll become the first U.S. president to address the African Union. (Video via Voice of America)