Obama Didn't Say 'Drone' Yesterday, And That Says Everything 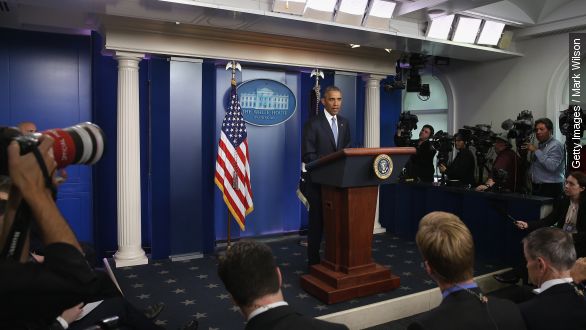 "It is a cruel and bitter truth that in the fog of war generally and our fight against terrorists specifically, mistakes — sometimes deadly mistakes — can occur," President Obama said.

During his press briefing Thursday, President Obama managed to describe a lethal drone strike without actually using the word drone.

His press secretary was also less than forthcoming.

We now know that in January, a U.S. counterterrorism op accidentally killed two hostages, including one American, in what other outlets have confirmed was a signature drone strike. In other words, a hit on a general target — in this case an Al-Qaeda compound — rather than a specific individual.

The drone program — the signature strikes, in particular — has come under heavy criticism for the number of civilian casualties. (Video via U.S. Air Force)

Using a combination of press reports, WikiLeaks cables and its own field reporting, The Bureau of Investigative Journalism estimates since 2004 between 423 and 962 civilians have been killed in U.S. drone strikes in Pakistan alone.

"In terms of 'Oh, my god, there are hundreds of civilians killed,' whatever — a lot of that is propaganda that is put out by those elements that are very much opposed to the U.S. coming in and helping," CIA Director John Brennan said.

Thing is, we have no way of knowing for sure. The CIA doesn't often comment on its drone program — let alone provide figures on who it's targeting.

"When I went through the process of becoming press secretary, one of the first things they told me was: 'You're not even to acknowledge the drone program. You're not even to discuss that it exists,'" former White House Press Secretary Robert Gibbs told MSNBC.

There have been efforts aimed at increasing transparency and oversight, including this bill from the House requiring the president make public the number of casualties from drone strikes.  But lawmakers have shown little appetite for reform.

President Obama, who has in the past defended drone strikes as legal and effective, said the botched mission was consistent with his guidelines for such operations but added he'd be ordering a review of what happened.