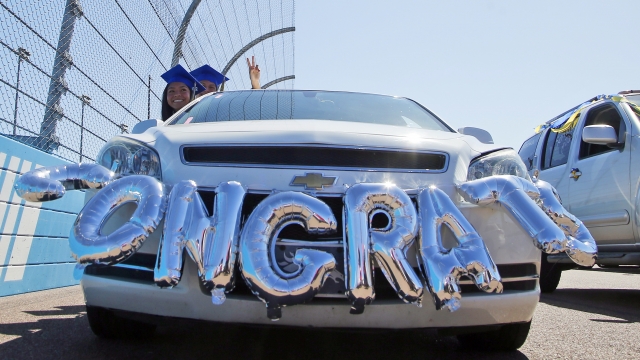 SMS
Obama To Graduates: Band Together To Save Environment, Beat Pandemics
By LeeAnne Lowry
By LeeAnne Lowry
May 17, 2020
The former president said in tough times, young generations learn from past mistakes and make the world stronger.
SHOW TRANSCRIPT

Former President Barack Obama delivered two virtual commencement addresses Saturday: one for 78 historically black colleges and universities, and the other for high school graduates across the nation.

In the speech to HBCUs, Obama said the coronavirus outbreak highlights underlying inequalities faced by black communities, relating it to the controversial February shooting of Ahmaud Arbery.

"We see it in the disproportionate impact of COVID-19 on our communities," Obama said. "Just as we see it when a black man goes for a jog and some folks feel like they can stop and question and shoot him if he doesn't submit to their questioning."

Later, in a widely broadcast ceremony spearheaded by the LeBron James Family Foundation, the 44th president warned new high school graduates that the current crisis will force them to grow up "faster than some generations" and urged them to band together to "save the environment and defeat future pandemics."

He said, "Doing what feels good, what's convenient, what's easy, that's how little kids think. Unfortunately, a lot of so-called grown-ups, including some with fancy titles and important jobs, still think that way, which is why things are so screwed up. I hope that instead, you decide to ground yourself in values that last, like honesty, hard work, responsibility, fairness, generosity, respect for others."

Obama didn't mention any leaders by name, but some interpreted his remarks as criticism of President Donald Trump.

The former president is set to give another commencement address June 6 on YouTube. Former First Lady Michelle Obama and Malala Yousafzai are also among those scheduled to speak at the event.