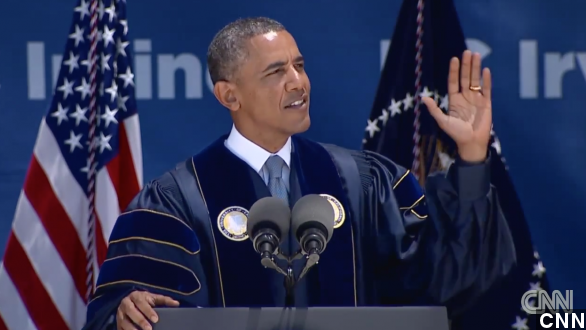 President Obama had a message for climate change deniers Saturday while delivering the commencement speech at the University of California, Irvine. He said denying it is like saying the moon is made of cheese and added this:

​"I'm announcing a new $1 billion competitive fund to help communities prepare for the impacts of climate change and build more resilient infrastructure across the country." (Via MSNBC)

The White House said in a release this fund will allow communities struggling from natural disasters to compete for funds to rebuild. The competition is aimed at encouraging communities to adopt policy changes and activities that plan for possible disasters that could occur in the future.

$180 million of that billion dollar fund will go to states devastated by Hurricane Sandy. According to The New York Times, the cash for the fund comes from existing federal recovery funds.

Aside from the announcement of the competitive fund, Obama took plenty of jabs at climate change deniers. The President criticized those who say climate change is not tied to humans, saying they pose a threat to the future. (via Time)

And the president told us what he really think about people who try to dodge the issue.

​"When they're asked about climate change, they say, 'Hey I'm not a scientist.' ... What that really means is, 'I know that climate change is really happening, but if I admit it, I'll be run out of town by radical friends that think climate science is a liberal plot.'" (Via CNN)

A White House spokesman told Politico Obama is working to, “Continue to make the case that climate change is already hurting Americans around the country and that it will only get worse for our children and grandchildren if we leave it for future generations to deal with.”

Fox News reports the president also encouraged the graduates to help find solutions to climate change. "Obama told those in attendance that they must respond now to protect children and future generations -- a theme he has repeated after announcing in recent weeks new rules for reducing carbon emission for plants that burn fossil fuel."

While some of the money from the competitive fund will be reserved for states affected by Hurricane Sandy, the rest will go toward communities where the president declared a major disaster from 2011-2013.