Obama Can't Wait To Roast Trump On The Campaign Trail 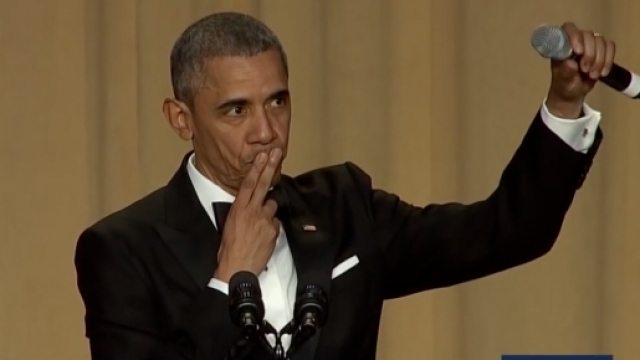 SMS
Obama Can't Wait To Roast Trump On The Campaign Trail
By Kate Grumke
By Kate Grumke
June 9, 2016
Now that President Obama has endorsed Hillary Clinton, he'll be on the campaign trail with her as comedian-in-chief.
SHOW TRANSCRIPT

President Obama reportedly can't wait to get on the campaign trail and stump for Hillary Clinton, whom he just endorsed. He's got a long history of mocking Republican nominee Donald Trump, and his ease with jokes will be an asset for the likely Democratic nominee.

He can't wait to get on the campaign trail and roast Trump.

"Do you think the Republicans are happy with their choice?" Jimmy Fallon asked.

He's been doing it for years.

"In an episode of 'Celebrity Apprentice,' you, Mr. Trump, recognized that the real problem was a lack of leadership. And so ultimately you didn't blame Lil Jon or Meatloaf. You fired Gary Busey. And these are the kinds of decisions that would keep me up at night," Obama said.

"And there is one area where Donald's experience could be invaluable, and that's closing Guantanamo because Trump knows a thing or two about running waterfront properties into the ground," Obama said.

"This is the guy, remember, who was sure that I was born in Kenya," he said.

"I hope you all are proud of yourselves. This guy wanted to give his hotel business a boost, and now we're praying that Cleveland makes it through July," Obama said.