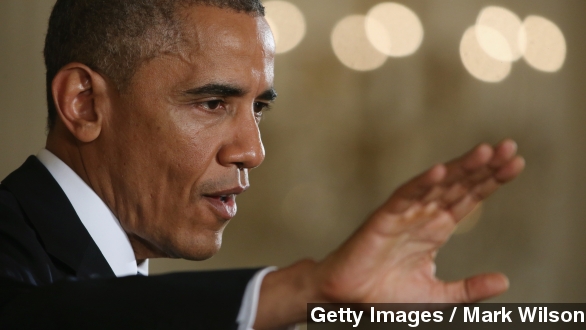 And Wednesday, reporters asked the president, "You mad, bro?"

PRESIDENT OBAMA, ON C-SPAN: "Obviously, Republicans had a good night."

OBAMA: "The American people sent a message ... They expect the people they elect to work as hard as they do."

In the president's words, his party's disaster at the polls Tuesday was as much because voters are upset with Washington dysfunction as it was because voters just didn't want Democrats in Washington.

Which of course is what he's going to say, because there's no good way to spin this. The Senate went from Democratic control to, likely, a 53-45 split for the GOP. Which means Republicans control Congress. Which means now he has to say things like this.

OBAMA, ON FOX NEWS: "On health care, there are certainly some lines I'm going to draw. Repeal of the law, I won't sign."

OBAMA, ON CNN: "If in fact one of the items on Mitch McConnell's agenda and John Boehner's agenda is to make responsible changes to the Affordable Care Act to make it work better, I'm going to be very open and receptive to hearing those ideas."

For the record, the man who will probably be Senate Majority Leader, Mitch McConnell, says a full repeal of Obamacare isn't on his agenda. But some members of the party further to the right say it's still in the cards.