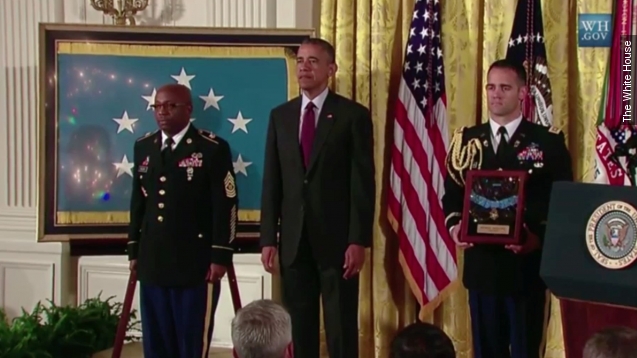 President Barack Obama awarded two World War I veterans the Medal of Honor after their deaths.

"It has taken a long time for Henry Johnson and William Shemin to receive the recognition they deserve, and there are surely others whose heroism is still unacknowledged," Obama said.

"In the early hours of May 15, 1918, Henry Johnson became a legend," Obama said. "A German raiding party — at least a dozen soldiers, maybe more — fired a hail of bullets. Henry fired back until his rifle was empty. ... Henry refused to let them take his brother in arms. ... Henry saved his fellow soldier from being taken prisoner."

"Sgt. Shemin received the Purple Heart and the Distinguished Service Cross. ... The rifleman crossed over open space under fire to rescue the wounded," the KSDK anchor said.

"On Aug. 7, 1918, ... the allies were hunkered down in one trench, the Germans in another. ... Those still in the trenches were left with a terrible choice: die trying to rescue a fellow soldier or watch him die, knowing that part of you will die along with them," Obama said. "William Shemin couldn't stand to watch. He ... dragged a wounded comrade to safety, and then he did it again, and again."

But it took some politics to make it happen. Last December, a defense bill passed with a provision, which waived the time limit for both men to receive the medal. As USA Today notes:

"Ordinarily, top military honors must be awarded within five years of the act that justified the award. ... Congress pushed the Pentagon to reopen the cases of Jewish and African-American soldiers who were awarded the Distinguished Service Cross and the Navy Cross but passed over for the highest honor."

Shemin's two daughters received the award in his honor, and a National Guard command sgt. maj. accepted on Johnson's behalf. As Obama said, "It's never too late to say thank you."