Syrian Cease-Fire Talks Between US, Russia Fail Due To 'Gaps In Trust' 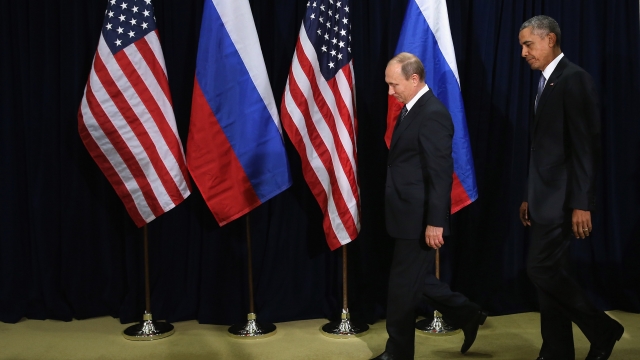 SMS
Syrian Cease-Fire Talks Between US, Russia Fail Due To 'Gaps In Trust'
By Ryan Biek
By Ryan Biek
September 5, 2016
Meanwhile, 2 million people are trapped in the crossfire in Aleppo.
SHOW TRANSCRIPT

President Barack Obama said Monday "gaps in trust" between the U.S. and Russia are keeping the two countries from reaching a military agreement.

Obama and Russian President Vladimir Putin met at the Group of 20 summit in an effort to reach a cease-fire deal in Syria, but ultimately, both walked away without an agreement.

Secretary of State John Kerry and his Russian counterpart had attempted a similar negotiation earlier, but that effort failed as well.

Russia and the U.S. are fighting ISIS in Syria, though a civil war in the country has complicated those efforts.

Russia supports Syrian President Bashar al-Assad and his regime, while the U.S. doesn't. Al-Assad's forces, and in the past Russian planes, have bombed U.S.-backed Syrian rebels under the guise of fighting ISIS.

In a press conference after his meeting with Putin, Obama said, "We have had some productive conversations about what a real cessation of hostilities would look like to allow us to both focus our energies on common enemies. ... But given the gaps of trust that exist, that’s a tough negotiation."

Calls for a truce have grown more urgent as Syrian national forces fight rebel troops in Aleppo. Almost 2 million people in the city are without food, water and medical care, but al-Assad has largely refused to let the U.N. deliver aid.

Besides the situation in Syria, Obama also reportedly discussed with Putin concerns over militant pro-Russian separatists in Ukraine and Russian cybersecurity crimes.