Obama And Netanyahu Are In Awkward New Territory 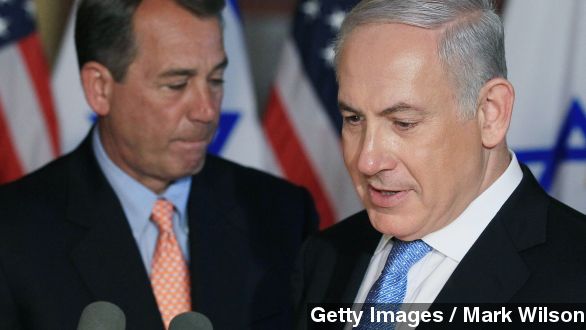 SMS
Obama And Netanyahu Are In Awkward New Territory
By Jill Ornitz
By Jill Ornitz
January 24, 2015
U.S.-Israeli relations are in a tough spot with Benjamin Netanyahu speaking to Congress and bypassing the White House during a March visit.
SHOW TRANSCRIPT

"Obviously, this reflects the extraordinary relationship, the special relationship between the United States and Israel," President Obama said after meeting with Israeli Prime Minister Benjamin Netanyahu in 2009.

But that "special relationship" is on shaky ground after House Speaker John Boehner invited the Israeli prime minister to speak to a joint session of Congress — and he didn't check with the White House first.

We've talked about Obama and Netanyahu's awkward relationship before, but this incident has U.S.-Israeli ties in some truly awkward territory.

Neither President Obama nor Secretary of State John Kerry will meet with Netanyahu during his visit in March.

White House aids told CNN, "President Obama in an angry phone call warned Netanyahu not to interfere in his battle with Congress over Iran's sanctions. But they say Netanyahu secretly plotted to do the opposite."

Obama and Netanyahu have long been at odds over how to stop Iran from building its nuclear program.

Netanyahu wants the U.S. to pile even more sanctions onto Iran to discourage nuclear developments.

Republicans are also calling for sanctions to address what Boehner has called, "the threat posed by Iran."

But Obama has touted diplomacy and the success of recent talks with Iran to downsize its nuclear ambitions.

According to The Wall Street Journal, the White House said Obama will not meet with Netanyahu out of fear that would interfere with Israeli elections that month.

Netanyahu may have to do some damage control because of this visit.

If Netanyahu is re-elected in March, he has a damaged relationship with the White House to worry about. As one writer from Haaretz put it, "It is [Netanyahu] who will then have to figure out how to survive for the next two years in the barren landscape and scorched earth that he left behind him this week."