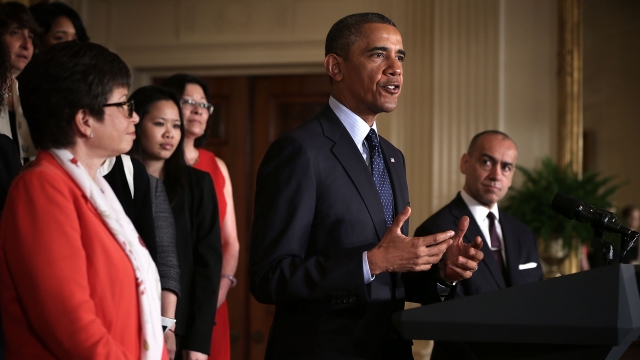 SMS
Obama Aims To Close Gender Wage Gap On Anniversary Of His Fair Pay Act
By Melissa Prax
By Melissa Prax
January 29, 2016
Obama is pushing to close the gender gap on the seventh anniversary of the first piece of legislation he signed in office.
SHOW TRANSCRIPT

In an attempt to close the gender wage gap, President Obama rolled out some new rules Friday.

The rules mean businesses with 100 or more workers will have to report employee pay information by race, gender and ethnicity to the government. In all, more than 63 million employees' pay will be accounted for.

Friday is the seventh anniversary of Obama's first piece of legislation as president — the Lilly Ledbetter Fair Pay Act. Stemming from a Supreme Court case, it loosened time constraints on when an employee could file an equal-pay lawsuit. (Videos via The White House & EdLaborDemocrats)

The pay gap has been something Obama has been pushing nearly his entire time in office, but he hasn't received much support from the Republican Congress.

This is due in part to the 1963 Equal Pay Act, which made gender wage discrimination illegal. Opponents of further fair pay legislation say the decades-old act is enough.

The wage gap between men and women in the U.S. is 2.5 points higher when compared to the average among other developed countries.

And on average, women in the U.S. currently make 78 cents to their male counterparts' dollar. (Video via BuzzFeed)

This video includes images from Getty Images and Abbie Row.