What We Know About Russia's Alleged Meddling During The US Election 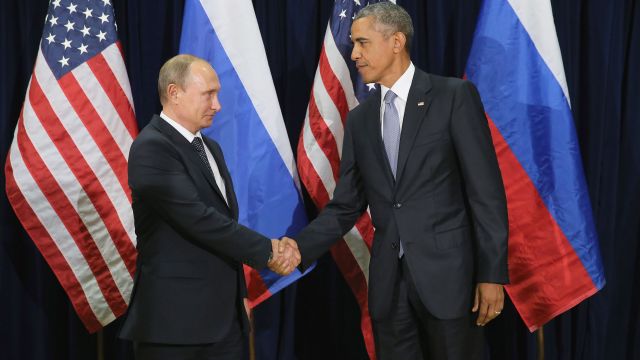 SMS
What We Know About Russia's Alleged Meddling During The US Election
By Jake Jones
By Jake Jones
December 10, 2016
After the U.S. accused Russia of hacking, talk of secret reports and hushed meetings is shaping cyber relations between the two countries.
SHOW TRANSCRIPT

Reports that Russia interfered with the U.S. presidential election have been circling for months.

So much so that President Barack Obama has called for an intelligence briefing on Russia's alleged meddling to be on his desk before he leaves office in January.

White House Deputy Press Secretary Eric Shultz said in a statement, "The president, earlier this week, instructed the intelligence community to conduct a full review of the pattern of malicious cyber activity related to our presidential election cycle."

But there's been a lot of speculation and hearsay on how, or even if, Russia affected the outcome of the U.S. election. Let's start with what we know.

Russia is known to be active in online espionage and even wrote the book on it. (Seriously.)

These hacker groups aren't directly connected to Moscow, but experts say their efforts mirror that of Russian military intelligence and often operate in unison with official Russian actors.

Both groups were suspected in the Democratic National Committee hack in July and have been behind similar attacks on government agencies worldwide.

They also were accused of hacking the Republican National Committee, which Republican officials announced and then retracted.

"It's important to note, Wolf, that they have not only hacked into the DNC, but also into the RNC," Rep. Michael McCaul told CNN's Wolf Blitzer.

"Sean Spicer tweeting, he's the spokesman for the RNC, that there's been 'no known breach' of the RNC networks," Blitzer announced moments after his interview with McCaul.

In October, the Obama administration officially accused Russia of trying to meddle in the presidential race.

But what the CIA and other U.S. intelligence agencies know for sure is a little harder to pin down.

Alleged secret meetings and closed-door sessions between lawmakers and intelligence agents are said to have created the usual partisanship; several reports say Democrats want retaliation or consequences for Russia's alleged hacking but that Republicans are more hesitant and skeptical of the evidence.

Some of those reports even say the CIA concluded Russia intervened in the election to help President-elect Donald Trump win. But they cite anonymous intelligent officials and no clear proof.