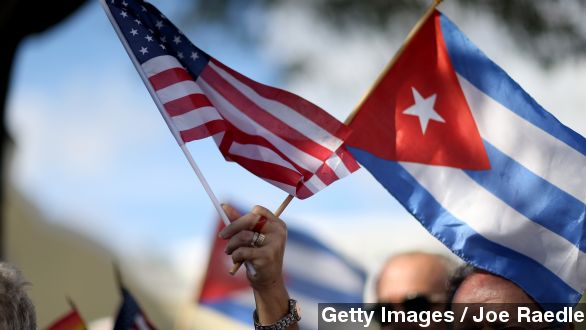 Friday’s the day. Any Americans who’ve been waiting to freely visit Cuba’s beaches or, you know, smoke one of their cigars, will finally be able to Friday.

Last month President Obama announced the U.S. would be easing travel and trade restrictions with Cuba along with a prisoner swap. They weren’t immediate though.

Since then, Cuba has released 53 political prisoners. And now, a month later, the Obama administration has set Friday as the day it will ease decades-old travel restrictions. (Video via BBC)

Come Friday there will be a host of changes in how Americans interact with Cuba, the most prominent being that a wide range of travelers will no longer be required to apply for a government permit to travel to or trade in Cuba.

Further changes include Americans now being able to bring as much money as they want when traveling to Cuba, including debit and credit cards. They can now bring back $400 worth of goods including $100 in alcohol and tobacco, and Cuban-Americans can now send Cuban family members $2,000 per fiscal quarter.

In a statement, U.S. Treasury Secretary Jack Lew called the previous policies “out of date” and says the new rules will “have a direct impact in further engaging and empowering the Cuban people, promoting positive change for Cuba’s citizens.” (Video via The Pew Charitable Trusts)

But not everyone is happy with the change.

Sen. Marco Rubio, a Cuban-American who’s been adamantly opposed to the president’s attempts at thawing U.S.-Cuba relations, called Thursday’s announcement “a windfall for the Castro regime” and questioned the administration’s legal authority to implement the policies.

It’s important to note that Friday’s changes aren’t clearing the entire slate between the U.S. and Cuba. Lifting the 1960 embargo against Cuba would require an act of Congress.

Still, the new policies do allow the U.S. to import some commercial products from certain small businesses in Cuba. The list of those products will be published by the State Department at a later date.

This video includes images from Getty Images and Sami Keinänen / CC BY SA 2.0, video from raunov / CC BY NC 2.0 and Martin Stuchi Montingelli / CC BY NC SA 2.0 and music from