The Oakland A's Mull A Last Stand Against Pro-Sports Owners 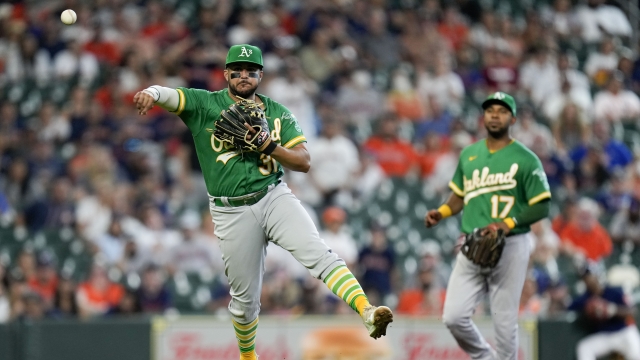 Melvin MacKay has been dreaming of turning his work into a family business for years, working to get his son and grandson employed at the port of Oakland right alongside him.

"It’s not a job most people would think of, but it’s a job that most of the people would love to have," MacKay said.

But now, he worries the work that made him the man-about-town could be staring down the beginning of the end.

He’s standing on the bedrock of his hometown team’s vision for its own future. The Oakland A's are the last remaining major league sports team in a city once buzzing with the electricity of game nights.

If they don’t get a gleaming new stadium at Howard terminal in the port of Oakland, they could abandon the bay for the high desert of Las Vegas.

Dave Kaval is the president of the A’s.

"The concrete is crumbling, and then the seats break and you can’t actually sit in them," Kaval said. "We’ve had issues with feral cats, a moth infestation, mold.”

Few will argue that the Oakland A’s need a new stadium, and many there would hate seeing Oakland’s last team leave the city that shaped it decades ago.

What’s gripped Oakland’s social and political debate is where they need a new stadium.

Susan Ransom works for SSA Terminals, a neighbor to the much smaller "Howard Terminal" that would become site of the new ballpark.

"We’re at 91% capacity, and the reason that Howard Terminal is so successful is because it is a relief valve for the terminals," Ransom said.

She doesn’t see any space to grow there if the new park comes in.

In a city with a pre-existing housing crisis, the project offers the opportunity to unlock thousands of new living units. But amid rising homelessness, the city has drawn a red line on the number of those units that need to be affordable.

Oakland Mayor Libby Schaaf is a champion of the project.

"15% of the units that get built on the project site itself need to be affordable," Schaaf said. "That is a non-negotiable for me. To let a sports deal also generate 18 acres of new waterfront public parks, new infrastructure, safer and cleaner infrastructure, as well as all that affordable housing and good union jobs."

She insists taxpayers wouldn't foot the bill, and that instead, any cost to the city would be paid for with tax revenue from the project.

"These are new taxes that the project itself will produce, that if the project doesn’t happen, those dollars would never exist for the city, so it’s not like they’re available for something else," Schaaf saaid.

But the project has a big price tag, and since the developers can ask the city to reimburse anything considered “public infrastructure” some Oakland residents worry about how much the city will really be on the hook for and if it’s all worth it.

NEWSY'S JAMES PACKARD: It is a $12 billion proposal, and the A’s have secured a billion dollars in funding for the stadium itself. So that $11 billion gap may scare people...

OAKLAND MAYOR LIBBY SCHAAF: No, no, no, no. None of that is true. You can’t frame it that way. People have been throwing that number around. We don’t even know where it came from.

It came from the A’s themselves.

Their estimation of full project cost, including all infrastructure development — condominiums and the stadium itself — is exactly that: $12 billion.

"It’s about 6 or almost 7 billion in construction costs — including the billion dollars for the stadium and then the remaining billions — about 6 billion is the economic impact of the project, so that’s everything from the tax dollars to the surrounding area, the increase in property taxes and value for everybody involved," Kaval said.

It’s no question that, if this comes together — however it comes together and whoever pays — bringing a stadium to the bustling center of industrial shipping has the serious potential to disrupt business, if not send it downstream entirely.

PACKARD: What about the half dozen to a dozen or so people who work on that land right now who are really worried that this project goes through, they're not going to have a job?

SCHAAF: I honestly don't know who you are talking about.

PACKARD: They would love to talk to you, actually, because we were down there today.

SCHAAF: There's a temporary activity that's being used because of the supply chain problems caused by the pandemic. That land is a giant parking lot. It's storing boxes. It has a ship that is literally parked there, but there has not been any terminal activity, no real economic development there for a decade.

But the people who work at Howard Terminal say its importance to shipping operations there aren’t temporary: Ships don't load or unload there, but trucks that take goods to and from the port do. Workers there say it’s a vital piece of the puzzle.

They fear a stadium would be a potential death blow to the vitality of a port that drives the economic engine of Oakland.

"We will suffer," MacKay said. "It’s already been said by the shippers. You put a ballpark there on maritime, we ain’t gonna bring our ships here. We want our ships to be loaded and offloaded.”

"I believe that Oakland will be able to show that it can be a win-win, that these sports stadiums, privately financed, can be the anchor for an incredible community serving development," Schaaf said.