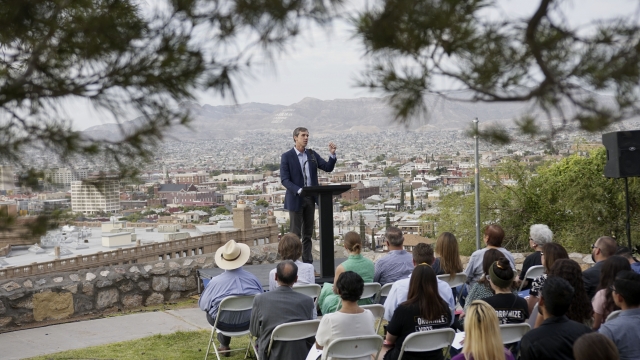 "We owe this community time to heal. ... But I think we also owe ourselves, this community, the families that have been affected, answers about why this happened here in El Paso. Answers about what it is going to take to ensure that it does not continue to happen in El Paso or communities like ours or anywhere across the United States. I begin with the gun that was used in that act of terror."

With his hometown in the background and its grief front and center, Beto O'Rourke relaunched his campaign for the presidency on Thursday. But in the aftermath of the El Paso mass killing of 22 people, he is tearing up the traditional script.

The former Texas congressman signaled he's largely ditching the politicking in the early primary states of Iowa and New Hampshire. Instead, he's recasting his campaign as a moral crusade against racial intolerance and the availability of weapons to act on such hatred. He's specifically targeting the divisive rhetoric of President Donald Trump.

O'Rourke says he'll campaign in immigrant communities and among people he says the president is singling out. His first stop is Friday in Mississippi, where sweeping ICE raids recently targeted undocumented immigrants working in local poultry plants.

O'Rourke has come to symbolize El Paso's resolve since the Aug. 3 shooting spree. The suspected gunman allegedly wrote about fighting a Latino "invasion," a word frequently used by the president.

But with Beto polling at just 3-5%, The Houston Chronicle editorialized that he should ditch his White House bid for a second Texas Senate run. Its opinion page wrote: "The chances of winning the race you're in now are vanishingly small. And Texas needs you."

But O'Rourke said Thursday he's staying in the presidential race, with one target in mind.