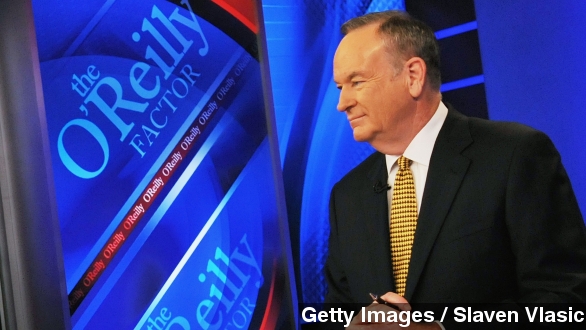 In the wake of the Brian Williams debacle at NBC, another big-name media personality is under fire for his war reporting; Fox News host Bill O'Reilly is involved in an ugly spat with liberal magazine Mother Jones.

The story starts last week, when O'Reilly took Williams to task for exaggerated stories of his Iraq War coverage.

O'Reilly told his viewers: "We should all open that proverbial network window and yell out, 'We're mad as hell, and we're not going to take it anymore!'"

But according to Mother Jones, O'Reilly has his own spotty record when it comes to war correspondence. The outlet published an article Thursday titled, "Bill O'Reilly Has His Own Brian Williams Problem." The article questions how O'Reilly has described his time covering the 1982 Falklands War for CBS.

Unsurprisingly, the conservative pundit didn't take the article well. In an early transcript of his Friday broadcast, O'Reilly uses phrases like "political hit piece," "defamation," "bottom rung of journalism" and so on and so forth.

Oddly enough, both O'Reilly and Mother Jones agree on the basic facts of the situation; O'Reilly did cover the Falklands War with the rest of the press corps in Buenos Aires, and the correspondent was caught up in a violent protest during that time.

The main difference Mother Jones takes issue with is O'Reilly's repeated characterization of his reporting as being in a "war zone." The outlet argues being in a violent protest doesn't qualify as battlefield reporting and says O'Reilly portrayed the riots as being more violent than they actually were.