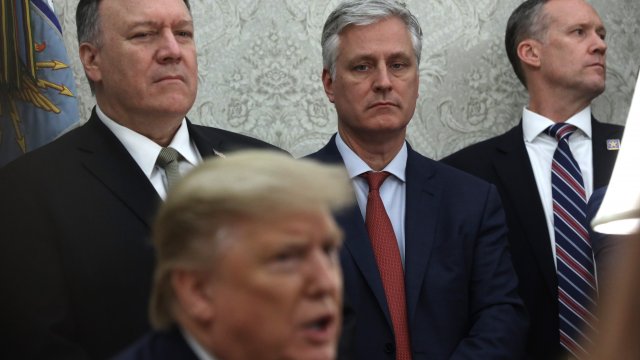 National Security Adviser Robert O'Brien is pushing back against reports Russia is trying to interfere in the 2020 election.

O'Brien told CBS' "Face The Nation" and ABC's "This Week" he had not seen the intelligence indicating Russia was interfering in the 2020 U.S. election in favor of President Trump.

“The national security adviser gets pretty good access to our intelligence," O'Brien told ABC. "I haven't seen any intelligence that Russia is doing anything to attempt to get President Trump reelected."

Here's some context on O'Brien's comments. Intelligence officials reportedly warned House lawmakers earlier this month that Russia was meddling in the 2020 election. They said Russia was not only trying to get President Trump reelected, it was also interfering in the Democratic primaries. But the interpretation of that intel briefing has been a point of debate.

According to the New York Times, the intelligence briefer, Shelby Pierson, said Russia's goal was to get President Trump reelected. But senior national security officials told CNN her assessment "overstated" Russia's ambitions. They went on to say Pierson left out important context and nuance.

ABC News' George Stephanopoulos asked O'Brien if he had a responsibility to look at the analysis regarding Russia's interference efforts. O'Brien sidestepped the question, only saying that he "hadn't seen the intel."